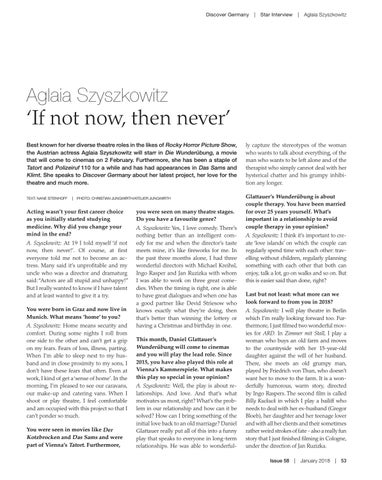 ‘If not now, then never’ Best known for her diverse theatre roles in the likes of Rocky Horror Picture Show, the Austrian actress Aglaia Szyszkowitz will starr in Die Wunderübung, a movie that will come to cinemas on 2 February. Furthermore, she has been a staple of Tatort and Polizeiruf 110 for a while and has had appearances in Das Sams and Klimt. She speaks to Discover Germany about her latest project, her love for the theatre and much more. TEXT: NANE STEINHOFF   |  PHOTO: CHRISTIAN JUNGWIRTH/ATELIER JUNGWIRTH

Acting wasn’t your first career choice as you initially started studying medicine. Why did you change your mind in the end? A. Szyszkowitz: At 19 I told myself ‘if not now, then never!’. Of course, at first everyone told me not to become an actress. Many said it’s unprofitable and my uncle who was a director and dramaturg said: “Actors are all stupid and unhappy!” But I really wanted to know if I have talent and at least wanted to give it a try. You were born in Graz and now live in Munich. What means ‘home’ to you? A. Szyszkowitz: Home means security and comfort. During some nights I roll from one side to the other and can’t get a grip on my fears. Fears of loss, illness, parting. When I’m able to sleep next to my husband and in close proximity to my sons, I don’t have these fears that often. Even at work, I kind of get a ‘sense of home’. In the morning, I’m pleased to see our caravans, our make-up and catering vans. When I shoot or play theatre, I feel comfortable and am occupied with this project so that I can’t ponder so much. You were seen in movies like Der Kotzbrocken and Das Sams and were part of Vienna’s Tatort. Furthermore,

you were seen on many theatre stages. Do you have a favourite genre? A. Szyszkowitz: Yes, I love comedy. There’s nothing better than an intelligent comedy for me and when the director’s taste meets mine, it’s like fireworks for me. In the past three months alone, I had three wonderful directors with Michael Kreihsl, Ingo Rasper and Jan Ruzizka with whom I was able to work on three great comedies. When the timing is right, one is able to have great dialogues and when one has a good partner like Devid Striesow who knows exactly what they’re doing, then that’s better than winning the lottery or having a Christmas and birthday in one. This month, Daniel Glattauer’s Wunderübung will come to cinemas and you will play the lead role. Since 2015, you have also played this role at Vienna’s Kammerspiele. What makes this play so special in your opinion? A. Szyszkowitz: Well, the play is about relationships. And love. And that’s what motivates us most, right? What’s the problem in our relationship and how can it be solved? How can I bring something of the initial love back to an old marriage? Daniel Glattauer really put all of this into a funny play that speaks to everyone in long-term relationships. He was able to wonderful-

ly capture the stereotypes of the woman who wants to talk about everything, of the man who wants to be left alone and of the therapist who simply cannot deal with her hysterical chatter and his grumpy inhibition any longer. Glattauer’s Wunderübung is about couple therapy. You have been married for over 25 years yourself. What’s important in a relationship to avoid couple therapy in your opinion? A. Szyszkowitz: I think it’s important to create ‘love islands’ on which the couple can regularly spend time with each other: travelling without children, regularly planning something with each other that both can enjoy, talk a lot, go on walks and so on. But this is easier said than done, right? Last but not least: what more can we look forward to from you in 2018? A. Szyszkowitz: I will play theatre in Berlin which I’m really looking forward too. Furthermore, I just filmed two wonderful movies for ARD. In Zimmer mit Stall, I play a woman who buys an old farm and moves to the countryside with her 15-year-old daughter against the will of her husband. There, she meets an old grumpy man, played by Friedrich von Thun, who doesn’t want her to move to the farm. It is a wonderfully humorous, warm story, directed by Ingo Raspers. The second film is called Billy Kuckuck in which I play a bailiff who needs to deal with her ex-husband (Gregor Bloeb), her daughter and her teenage lover and with all her clients and their sometimes rather weird strokes of fate - also a really fun story that I just finished filming in Cologne, under the direction of Jan Ruzizka. Issue 58  |  January 2018  |  53