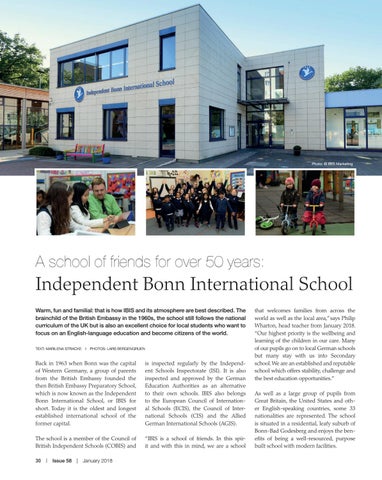 A school of friends for over 50 years:

Independent Bonn International School Warm, fun and familial: that is how IBIS and its atmosphere are best described. The brainchild of the British Embassy in the 1960s, the school still follows the national curriculum of the UK but is also an excellent choice for local students who want to focus on an English-language education and become citizens of the world. TEXT: MARILENA STRACKE  I  PHOTOS: LARS BERGENGRUEN

Back in 1963 when Bonn was the capital of Western Germany, a group of parents from the British Embassy founded the then British Embassy Preparatory School, which is now known as the Independent Bonn International School, or IBIS for short. Today it is the oldest and longest established international school of the former capital.

“IBIS is a school of friends. In this spirit and with this in mind, we are a school

that welcomes families from across the world as well as the local area,” says Philip Wharton, head teacher from January 2018. “Our highest priority is the wellbeing and learning of the children in our care. Many of our pupils go on to local German schools but many stay with us into Secondary school. We are an established and reputable school which offers stability, challenge and the best education opportunities.” As well as a large group of pupils from Great Britain, the United States and other English-speaking countries, some 33 nationalities are represented. The school is situated in a residential, leafy suburb of Bonn-Bad Godesberg and enjoys the benefits of being a well-resourced, purpose built school with modern facilities.