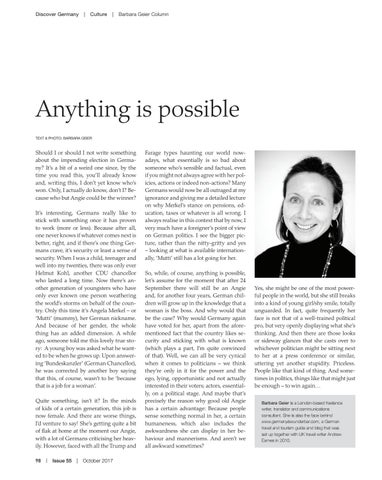 Should I or should I not write something about the impending election in Germany? It’s a bit of a weird one since, by the time you read this, you’ll already know and, writing this, I don’t yet know who’s won. Only, I actually do know, don’t I? Because who but Angie could be the winner? It’s interesting, Germans really like to stick with something once it has proven to work (more or less). Because after all, one never knows if whatever comes next is better, right, and if there’s one thing Germans crave, it’s security or least a sense of security. When I was a child, teenager and well into my twenties, there was only ever Helmut Kohl, another CDU chancellor who lasted a long time. Now there’s another generation of youngsters who have only ever known one person weathering the world’s storms on behalf of the country. Only this time it’s Angela Merkel – or ‘Mutti’ (mummy), her German nickname. And because of her gender, the whole thing has an added dimension. A while ago, someone told me this lovely true story: A young boy was asked what he wanted to be when he grows up. Upon answering ‘Bundeskanzler’ (German Chancellor), he was corrected by another boy saying that this, of course, wasn’t to be ‘because that is a job for a woman’. Quite something, isn’t it? In the minds of kids of a certain generation, this job is now female. And there are worse things, I’d venture to say! She’s getting quite a bit of flak at home at the moment our Angie, with a lot of Germans criticising her heavily. However, faced with all the Trump and 98  |  Issue 55  |  October 2017

Farage types haunting our world nowadays, what essentially is so bad about someone who’s sensible and factual, even if you might not always agree with her policies, actions or indeed non-actions? Many Germans would now be all outraged at my ignorance and giving me a detailed lecture on why Merkel’s stance on pensions, education, taxes or whatever is all wrong. I always realise in this context that by now, I very much have a foreigner’s point of view on German politics. I see the bigger picture, rather than the nitty-gritty and yes – looking at what is available internationally, ‘Mutti’ still has a lot going for her. So, while, of course, anything is possible, let’s assume for the moment that after 24 September there will still be an Angie and, for another four years, German children will grow up in the knowledge that a woman is the boss. And why would that be the case? Why would Germany again have voted for her, apart from the aforementioned fact that the country likes security and sticking with what is known (which plays a part, I’m quite convinced of that). Well, we can all be very cynical when it comes to politicians – we think they’re only in it for the power and the ego, lying, opportunistic and not actually interested in their voters; actors, essentially, on a political stage. And maybe that’s precisely the reason why good old Angie has a certain advantage: Because people sense something normal in her, a certain humaneness, which also includes the awkwardness she can display in her behaviour and mannerisms. And aren’t we all awkward sometimes?

Yes, she might be one of the most powerful people in the world, but she still breaks into a kind of young girl/shy smile, totally unguarded. In fact, quite frequently her face is not that of a well-trained political pro, but very openly displaying what she’s thinking. And then there are those looks or sideway glances that she casts over to whichever politician might be sitting next to her at a press conference or similar, uttering yet another stupidity. Priceless. People like that kind of thing. And sometimes in politics, things like that might just be enough – to win again… Barbara Geier is a London-based freelance writer, translator and communications consultant. She is also the face behind www.germanyiswunderbar.com, a German travel and tourism guide and blog that was set up together with UK travel writer Andrew Eames in 2010.