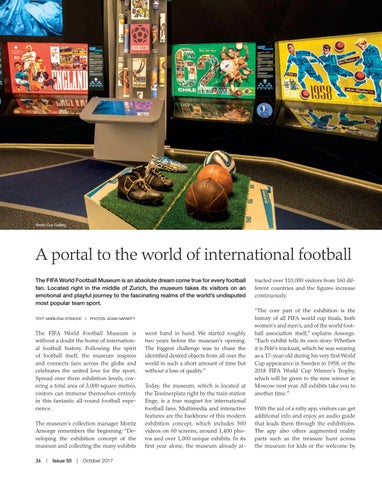 A portal to the world of international football The FIFA World Football Museum is an absolute dream come true for every football fan. Located right in the middle of Zurich, the museum takes its visitors on an emotional and playful journey to the fascinating realms of the world’s undisputed most popular team sport. TEXT: MARILENA STRACKE  I  PHOTOS: ADAM NAPARTY

The FIFA World Football Museum is without a doubt the home of international football history. Following the spirit of football itself, the museum inspires and connects fans across the globe and celebrates the united love for the sport. Spread over three exhibition levels, covering a total area of 3,000 square metres, visitors can immerse themselves entirely in this fantastic all-round football experience. The museum’s collection manager Moritz Ansorge remembers the beginning: “Developing the exhibition concept of the museum and collecting the many exhibits 36  |  Issue 55  |  October 2017

went hand in hand. We started roughly two years before the museum’s opening. The biggest challenge was to chase the identified desired objects from all over the world in such a short amount of time but without a loss of quality.” Today, the museum, which is located at the Tessinerplatz right by the train station Enge, is a true magnet for international football fans. Multimedia and interactive features are the backbone of this modern exhibition concept, which includes 500 videos on 60 screens, around 1,400 photos and over 1,000 unique exhibits. In its first year alone, the museum already at-

tracted over 110,000 visitors from 160 different countries and the figures increase continuously. “The core part of the exhibition is the history of all FIFA world cup finals, both women’s and men’s, and of the world football association itself,” explains Ansorge. “Each exhibit tells its own story: Whether it is Pelé’s tracksuit, which he was wearing as a 17-year-old during his very first World Cup appearance in Sweden in 1958, or the 2018 FIFA World Cup Winner’s Trophy, which will be given to the new winner in Moscow next year. All exhibits take you to another time.” With the aid of a nifty app, visitors can get additional info and enjoy an audio guide that leads them through the exhibitions. The app also offers augmented reality parts such as the treasure hunt across the museum for kids or the welcome by