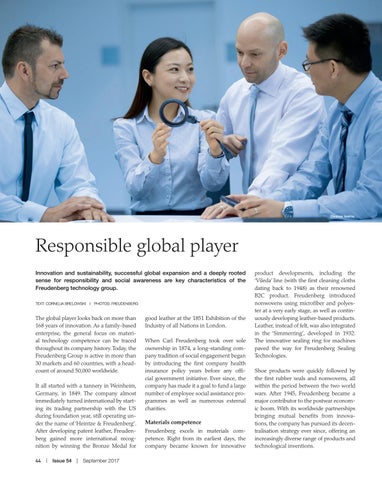 The global player looks back on more than 168 years of innovation. As a family-based enterprise, the general focus on material technology competence can be traced throughout its company history. Today, the Freudenberg Group is active in more than 30 markets and 60 countries, with a headcount of around 50,000 worldwide. It all started with a tannery in Weinheim, Germany, in 1849. The company almost immediately turned international by starting its trading partnership with the US during foundation year, still operating under the name of ‘Heintze & Freudenberg’. After developing patent leather, Freudenberg gained more international recognition by winning the Bronze Medal for 44  |  Issue 54  |  September 2017

good leather at the 1851 Exhibition of the Industry of all Nations in London. When Carl Freudenberg took over sole ownership in 1874, a long-standing company tradition of social engagement began by introducing the first company health insurance policy years before any official government initiative. Ever since, the company has made it a goal to fund a large number of employee social assistance programmes as well as numerous external charities. Materials competence Freudenberg excels in materials competence. Right from its earliest days, the company became known for innovative

product developments, including the ‘Vileda’ line (with the first cleaning cloths dating back to 1948) as their renowned B2C product. Freudenberg introduced nonwovens using microfiber and polyester at a very early stage, as well as continuously developing leather-based products. Leather, instead of felt, was also integrated in the ‘Simmerring’, developed in 1932. The innovative sealing ring for machines paved the way for Freudenberg Sealing Technologies. Shoe products were quickly followed by the first rubber seals and nonwovens, all within the period between the two world wars. After 1945, Freudenberg became a major contributor to the postwar economic boom. With its worldwide partnerships bringing mutual benefits from innovations, the company has pursued its decentralisation strategy ever since, offering an increasingly diverse range of products and technological inventions.