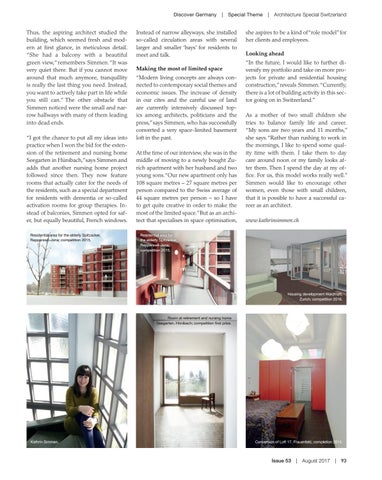 Thus, the aspiring architect studied the building, which seemed fresh and modern at first glance, in meticulous detail. “She had a balcony with a beautiful green view,” remembers Simmen. “It was very quiet there. But if you cannot move around that much anymore, tranquillity is really the last thing you need. Instead, you want to actively take part in life while you still can.” The other obstacle that Simmen noticed were the small and narrow hallways with many of them leading into dead ends. “I got the chance to put all my ideas into practice when I won the bid for the extension of the retirement and nursing home Seegarten in Hünibach,”says Simmen and adds that another nursing home project followed since then. They now feature rooms that actually cater for the needs of the residents, such as a special department for residents with dementia or so-called activation rooms for group therapies. Instead of balconies, Simmen opted for safer, but equally beautiful, French windows. Residential area for the elderly Spitzacker, Rapperswil-Jona; competition 2015.

Instead of narrow alleyways, she installed so-called circulation areas with several larger and smaller ‘bays’ for residents to meet and talk. Making the most of limited space “Modern living concepts are always connected to contemporary social themes and economic issues. The increase of density in our cites and the careful use of land are currently intensively discussed topics among architects, politicians and the press,” says Simmen, who has successfully converted a very space-limited basement loft in the past. At the time of our interview, she was in the middle of moving to a newly bought Zurich apartment with her husband and two young sons.“Our new apartment only has 108 square metres – 27 square metres per person compared to the Swiss average of 44 square metres per person – so I have to get quite creative in order to make the most of the limited space.”But as an architect that specialises in space optimisation,

she aspires to be a kind of “role model” for her clients and employees. Looking ahead “In the future, I would like to further diversify my portfolio and take on more projects for private and residential housing construction,” reveals Simmen. “Currently, there is a lot of building activity in this sector going on in Switzerland.” As a mother of two small children she tries to balance family life and career. “My sons are two years and 11 months,” she says. “Rather than rushing to work in the mornings, I like to spend some quality time with them. I take them to day care around noon or my family looks after them. Then I spend the day at my office. For us, this model works really well.” Simmen would like to encourage other women, even those with small children, that it is possible to have a successful career as an architect. www.kathrinsimmen.ch