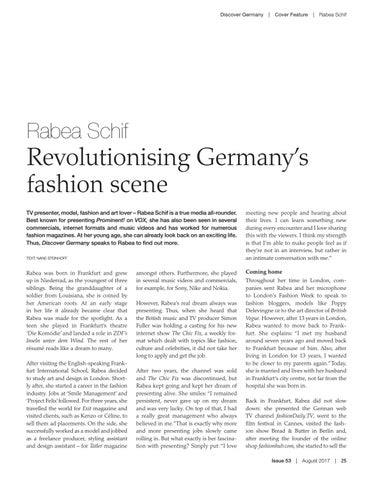 Revolutionising Germany’s fashion scene TV presenter, model, fashion and art lover – Rabea Schif is a true media all-rounder. Best known for presenting Prominent! on VOX, she has also been seen in several commercials, internet formats and music videos and has worked for numerous fashion magazines. At her young age, she can already look back on an exciting life. Thus, Discover Germany speaks to Rabea to find out more. TEXT: NANE STEINHOFF

Rabea was born in Frankfurt and grew up in Niederrad, as the youngest of three siblings. Being the granddaughter of a soldier from Louisiana, she is coined by her American roots. At an early stage in her life it already became clear that Rabea was made for the spotlight. As a teen she played in Frankfurt’s theatre ‘Die Komödie’ and landed a role in ZDF’s Inseln unter dem Wind. The rest of her résumé reads like a dream to many. After visiting the English-speaking Frankfurt International School, Rabea decided to study art and design in London. Shortly after, she started a career in the fashion industry. Jobs at ‘Smile Management’ and ‘Project Felix’ followed. For three years, she travelled the world for Exit magazine and visited clients, such as Kenzo or Céline, to sell them ad placements. On the side, she successfully worked as a model and jobbed as a freelance producer, styling assistant and design assistant – for Tatler magazine

amongst others. Furthermore, she played in several music videos and commercials, for example, for Sony, Nike and Nokia. However, Rabea’s real dream always was presenting. Thus, when she heard that the British music and TV producer Simon Fuller was holding a casting for his new internet show The Chic Fix, a weekly format which dealt with topics like fashion, culture and celebrities, it did not take her long to apply and get the job. After two years, the channel was sold and The Chic Fix was discontinued, but Rabea kept going and kept her dream of presenting alive. She smiles: “I remained persistent, never gave up on my dream and was very lucky. On top of that, I had a really great management who always believed in me.”That is exactly why more and more presenting jobs slowly came rolling in. But what exactly is her fascination with presenting? Simply put: “I love

meeting new people and hearing about their lives. I can learn something new during every encounter and I love sharing this with the viewers. I think my strength is that I’m able to make people feel as if they’re not in an interview, but rather in an intimate conversation with me.” Coming home Throughout her time in London, companies sent Rabea and her microphone to London’s Fashion Week to speak to fashion bloggers, models like Poppy Delevingne or to the art director of British Vogue. However, after 13 years in London, Rabea wanted to move back to Frankfurt. She explains: “I met my husband around seven years ago and moved back to Frankfurt because of him. Also, after living in London for 13 years, I wanted to be closer to my parents again.” Today, she is married and lives with her husband in Frankfurt’s city centre, not far from the hospital she was born in. Back in Frankfurt, Rabea did not slow down: she presented the German web TV channel fashionDaily.TV, went to the film festival in Cannes, visited the fashion show Bread & Butter in Berlin and, after meeting the founder of the online shop fashionhub.com, she started to sell the Issue 53  |  August 2017  |  25