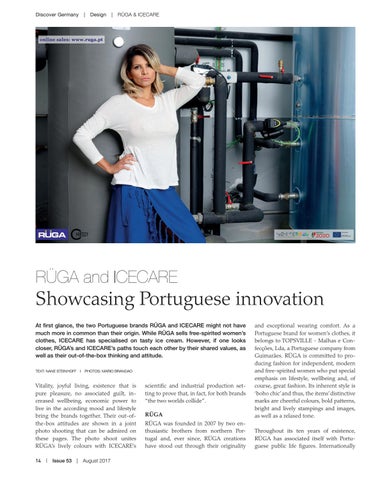 Showcasing Portuguese innovation At first glance, the two Portuguese brands RÜGA and ICECARE might not have much more in common than their origin. While RÜGA sells free-spirited women’s clothes, ICECARE has specialised on tasty ice cream. However, if one looks closer, RÜGA’s and ICECARE’s paths touch each other by their shared values, as well as their out-of-the-box thinking and attitude.

and exceptional wearing comfort. As a Portuguese brand for women’s clothes, it belongs to TOPSVILLE - Malhas e Confecções, Lda, a Portuguese company from Guimarães. RÜGA is committed to producing fashion for independent, modern and free-spirited women who put special emphasis on lifestyle, wellbeing and, of course, great fashion. Its inherent style is ‘boho chic’ and thus, the items’ distinctive marks are cheerful colours, bold patterns, bright and lively stampings and images, as well as a relaxed tone.

RÜGA was founded in 2007 by two enthusiastic brothers from northern Portugal and, ever since, RÜGA creations have stood out through their originality

Throughout its ten years of existence, RÜGA has associated itself with Portuguese public life figures. Internationally

Vitality, joyful living, existence that is pure pleasure, no associated guilt, increased wellbeing, economic power to live in the according mood and lifestyle bring the brands together. Their out-ofthe-box attitudes are shown in a joint photo shooting that can be admired on these pages. The photo shoot unites RÜGA’s lively colours with ICECARE’s 14  |  Issue 53  |  August 2017

scientific and industrial production setting to prove that, in fact, for both brands “the two worlds collide”.