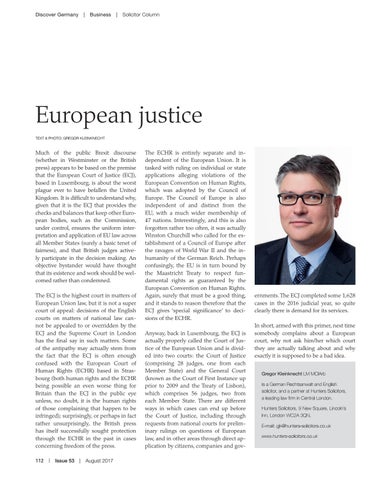 Much of the public Brexit discourse (whether in Westminster or the British press) appears to be based on the premise that the European Court of Justice (ECJ), based in Luxembourg, is about the worst plague ever to have befallen the United Kingdom. It is difficult to understand why, given that it is the ECJ that provides the checks and balances that keep other European bodies, such as the Commission, under control, ensures the uniform interpretation and application of EU law across all Member States (surely a basic tenet of fairness), and that British judges actively participate in the decision making. An objective bystander would have thought that its existence and work should be welcomed rather than condemned. The ECJ is the highest court in matters of European Union law, but it is not a super court of appeal: decisions of the English courts on matters of national law cannot be appealed to or overridden by the ECJ and the Supreme Court in London has the final say in such matters. Some of the antipathy may actually stem from the fact that the ECJ is often enough confused with the European Court of Human Rights (ECHR) based in Strasbourg (both human rights and the ECHR being possible an even worse thing for Britain than the ECJ in the public eye unless, no doubt, it is the human rights of those complaining that happen to be infringed); surprisingly, or perhaps in fact rather unsurprisingly, the British press has itself successfully sought protection through the ECHR in the past in cases concerning freedom of the press. 112  |  Issue 53  |  August 2017

The ECHR is entirely separate and independent of the European Union. It is tasked with ruling on individual or state applications alleging violations of the European Convention on Human Rights, which was adopted by the Council of Europe. The Council of Europe is also independent of and distinct from the EU, with a much wider membership of 47 nations. Interestingly, and this is also forgotten rather too often, it was actually Winston Churchill who called for the establishment of a Council of Europe after the ravages of World War II and the inhumanity of the German Reich. Perhaps confusingly, the EU is in turn bound by the Maastricht Treaty to respect fundamental rights as guaranteed by the European Convention on Human Rights. Again, surely that must be a good thing, and it stands to reason therefore that the ECJ gives ‘special significance’ to decisions of the ECHR. Anyway, back in Luxembourg, the ECJ is actually properly called the Court of Justice of the European Union and is divided into two courts: the Court of Justice (comprising 28 judges, one from each Member State) and the General Court (known as the Court of First Instance up prior to 2009 and the Treaty of Lisbon), which comprises 56 judges, two from each Member State. There are different ways in which cases can end up before the Court of Justice, including through requests from national courts for preliminary rulings on questions of European law, and in other areas through direct application by citizens, companies and gov-

ernments. The ECJ completed some 1,628 cases in the 2016 judicial year, so quite clearly there is demand for its services. In short, armed with this primer, next time somebody complains about a European court, why not ask him/her which court they are actually talking about and why exactly it is supposed to be a bad idea. Gregor Kleinknecht LM MCIArb is a German Rechtsanwalt and English solicitor, and a partner at Hunters Solicitors, a leading law firm in Central London. Hunters Solicitors, 9 New Square, Lincoln’s Inn, London WC2A 3QN, E-mail: gjk@hunters-solicitors.co.uk www.hunters-solicitors.co.uk