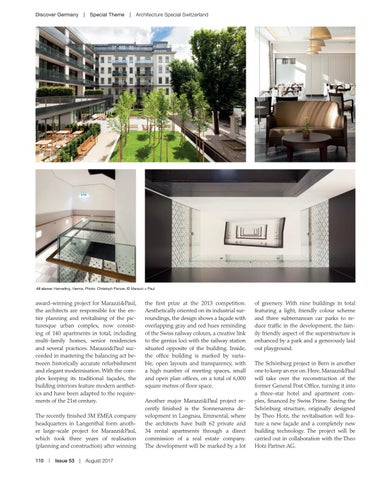 award-winning project for Marazzi&Paul, the architects are responsible for the entire planning and revitalising of the picturesque urban complex, now consisting of 140 apartments in total, including multi-family homes, senior residencies and several practices. Marazzi&Paul succeeded in mastering the balancing act between historically accurate refurbishment and elegant modernisation. With the complex keeping its traditional façades, the building interiors feature modern aesthetics and have been adapted to the requirements of the 21st century. The recently finished 3M EMEA company headquarters in Langenthal form another large-scale project for Marazzi&Paul, which took three years of realisation (planning and construction) after winning 110  |  Issue 53  |  August 2017

the first prize at the 2013 competition. Aesthetically oriented on its industrial surroundings, the design shows a façade with overlapping gray and red hues reminding of the Swiss railway colours, a creative link to the genius loci with the railway station situated opposite of the building. Inside, the office building is marked by variable, open layouts and transparency, with a high number of meeting spaces, small and open plan offices, on a total of 6,000 square metres of floor space. Another major Marazzi&Paul project recently finished is the Sonnenarena development in Langnau, Emmental, where the architects have built 62 private and 34 rental apartments through a direct commission of a real estate company. The development will be marked by a lot

of greenery. With nine buildings in total featuring a light, friendly colour scheme and three subterranean car parks to reduce traffic in the development, the family friendly aspect of the superstructure is enhanced by a park and a generously laid out playground. The Schönburg project in Bern is another one to keep an eye on. Here, Marazzi&Paul will take over the reconstruction of the former General Post Office, turning it into a three-star hotel and apartment complex, financed by Swiss Prime. Saving the Schönburg structure, originally designed by Theo Hotz, the revitalisation will feature a new façade and a completely new building technology. The project will be carried out in collaboration with the Theo Hotz Partner AG.