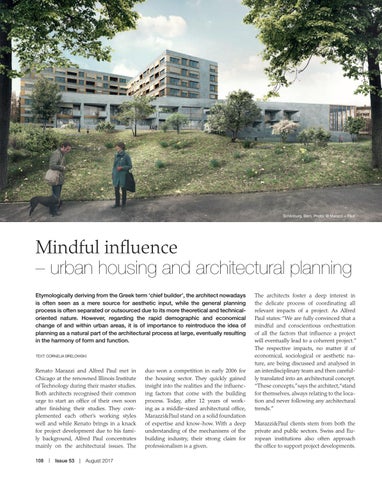 Mindful influence – urban housing and architectural planning Etymologically deriving from the Greek term ‘chief builder’, the architect nowadays is often seen as a mere source for aesthetic input, while the general planning process is often separated or outsourced due to its more theoretical and technicaloriented nature. However, regarding the rapid demographic and economical change of and within urban areas, it is of importance to reintroduce the idea of planning as a natural part of the architectural process at large, eventually resulting in the harmony of form and function. TEXT: CORNELIA BRELOWSKI

Renato Marazzi and Alfred Paul met in Chicago at the renowned Illinois Institute of Technology during their master studies. Both architects recognised their common urge to start an office of their own soon after finishing their studies. They complemented each other’s working styles well and while Renato brings in a knack for project development due to his family background, Alfred Paul concentrates mainly on the architectural issues. The 108  |  Issue 53  |  August 2017

duo won a competition in early 2006 for the housing sector. They quickly gained insight into the realities and the influencing factors that come with the building process. Today, after 12 years of working as a middle-sized architectural office, Marazzi&Paul stand on a solid foundation of expertise and know-how. With a deep understanding of the mechanisms of the building industry, their strong claim for professionalism is a given.

The architects foster a deep interest in the delicate process of coordinating all relevant impacts of a project. As Alfred Paul states: “We are fully convinced that a mindful and conscientious orchestration of all the factors that influence a project will eventually lead to a coherent project.” The respective impacts, no matter if of economical, sociological or aesthetic nature, are being discussed and analysed in an interdisciplinary team and then carefully translated into an architectural concept. “These concepts,”says the architect,“stand for themselves, always relating to the location and never following any architectural trends.” Marazzi&Paul clients stem from both the private and public sectors. Swiss and European institutions also often approach the office to support project developments.