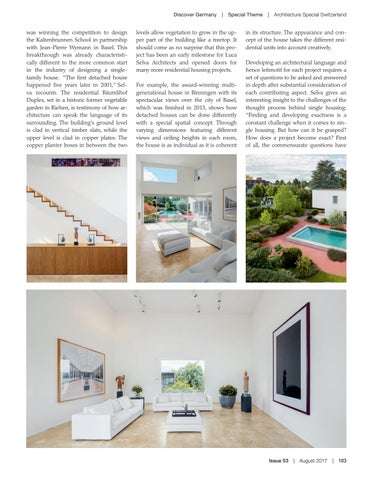 was winning the competition to design the Kaltenbrunnen School in partnership with Jean-Pierre Wymann in Basel. This breakthrough was already characteristically different to the more common start in the industry of designing a singlefamily house. “The first detached house happened five years later in 2001,” Selva recounts. The residential Bäumlihof Duplex, set in a historic former vegetable garden in Riehen, is testimony of how architecture can speak the language of its surrounding. The building’s ground level is clad in vertical timber slats, while the upper level is clad in copper plates. The copper planter boxes in between the two

levels allow vegetation to grow in the upper part of the building like a treetop. It should come as no surprise that this project has been an early milestone for Luca Selva Architects and opened doors for many more residential housing projects. For example, the award-winning multigenerational house in Binningen with its spectacular views over the city of Basel, which was finished in 2013, shows how detached houses can be done differently with a special spatial concept. Through varying dimensions featuring different views and ceiling heights in each room, the house is as individual as it is coherent

in its structure. The appearance and concept of the house takes the different residential units into account creatively. Developing an architectural language and hence leitmotif for each project requires a set of questions to be asked and answered in depth after substantial consideration of each contributing aspect. Selva gives an interesting insight to the challenges of the thought process behind single housing: “Finding and developing exactness is a constant challenge when it comes to single housing. But how can it be grasped? How does a project become exact? First of all, the commensurate questions have