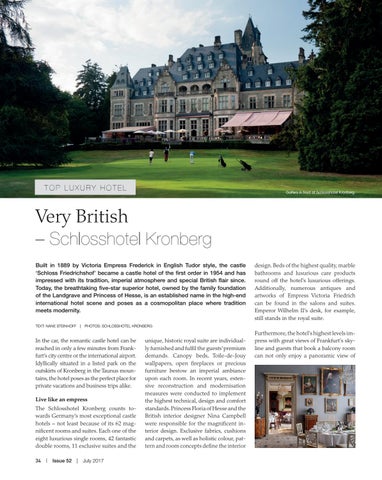 Golfers in front of Schlosshotel Kronberg.

– Schlosshotel Kronberg Built in 1889 by Victoria Empress Frederick in English Tudor style, the castle ‘Schloss Friedrichshof’ became a castle hotel of the first order in 1954 and has impressed with its tradition, imperial atmosphere and special British flair since. Today, the breathtaking five-star superior hotel, owned by the family foundation of the Landgrave and Princess of Hesse, is an established name in the high-end international hotel scene and poses as a cosmopolitan place where tradition meets modernity.

design. Beds of the highest quality, marble bathrooms and luxurious care products round off the hotel’s luxurious offerings. Additionally, numerous antiques and artworks of Empress Victoria Friedrich can be found in the salons and suites. Emperor Wilhelm II’s desk, for example, still stands in the royal suite.

In the car, the romantic castle hotel can be reached in only a few minutes from Frankfurt’s city centre or the international airport. Idyllically situated in a listed park on the outskirts of Kronberg in the Taunus mountains, the hotel poses as the perfect place for private vacations and business trips alike. Live like an empress The Schlosshotel Kronberg counts towards Germany’s most exceptional castle hotels – not least because of its 62 magnificent rooms and suites. Each one of the eight luxurious single rooms, 42 fantastic double rooms, 11 exclusive suites and the 34  |  Issue 52  |  July 2017

Furthermore, the hotel’s highest levels impress with great views of Frankfurt’s skyline and guests that book a balcony room can not only enjoy a panoramic view of