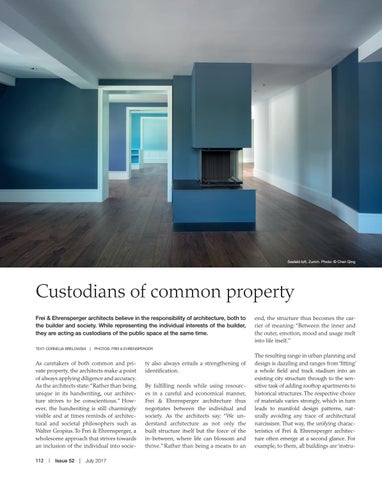 Custodians of common property Frei & Ehrensperger architects believe in the responsibility of architecture, both to the builder and society. While representing the individual interests of the builder, they are acting as custodians of the public space at the same time.

end, the structure thus becomes the carrier of meaning: “Between the inner and the outer, emotion, mood and usage melt into life itself.”

As caretakers of both common and private property, the architects make a point of always applying diligence and accuracy. As the architects state:“Rather than being unique in its handwriting, our architecture strives to be conscientious.” However, the handwriting is still charmingly visible and at times reminds of architectural and societal philosophers such as Walter Gropius. To Frei & Ehrensperger, a wholesome approach that strives towards an inclusion of the individual into socie112  |  Issue 52  |  July 2017

ty also always entails a strengthening of identification. By fulfilling needs while using resources in a careful and economical manner, Frei & Ehrensperger architecture thus negotiates between the individual and society. As the architects say: “We understand architecture as not only the built structure itself but the force of the in-between, where life can blossom and thrive.” Rather than being a means to an

The resulting range in urban planning and design is dazzling and ranges from ‘fitting’ a whole field and track stadium into an existing city structure through to the sensitive task of adding rooftop apartments to historical structures. The respective choice of materials varies strongly, which in turn leads to manifold design patterns, naturally avoiding any trace of architectural narcissism. That way, the unifying characteristics of Frei & Ehrensperger architecture often emerge at a second glance. For example, to them, all buildings are ‘instru-