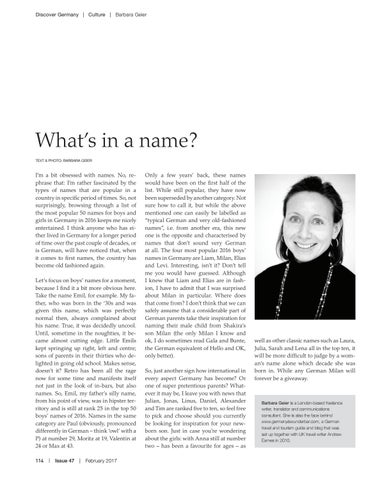 I’m a bit obsessed with names. No, rephrase that: I’m rather fascinated by the types of names that are popular in a country in specific period of times. So, not surprisingly, browsing through a list of the most popular 50 names for boys and girls in Germany in 2016 keeps me nicely entertained. I think anyone who has either lived in Germany for a longer period of time over the past couple of decades, or is German, will have noticed that, when it comes to first names, the country has become old fashioned again. Let’s focus on boys’ names for a moment, because I find it a bit more obvious here. Take the name Emil, for example. My father, who was born in the ‘30s and was given this name, which was perfectly normal then, always complained about his name. True, it was decidedly uncool. Until, sometime in the noughties, it became almost cutting edge. Little Emils kept springing up right, left and centre; sons of parents in their thirties who delighted in going old school. Makes sense, doesn’t it? Retro has been all the rage now for some time and manifests itself not just in the look of in-bars, but also names. So, Emil, my father’s silly name, from his point of view, was in hipster territory and is still at rank 25 in the top 50 boys’ names of 2016. Names in the same category are Paul (obviously, pronounced differently in German – think ‘owl’ with a P) at number 29, Moritz at 19, Valentin at 24 or Max at 43. 114  |  Issue 47  |  February 2017

Only a few years’ back, these names would have been on the first half of the list. While still popular, they have now been superseded by another category. Not sure how to call it, but while the above mentioned one can easily be labelled as “typical German and very old-fashioned names”, i.e. from another era, this new one is the opposite and characterised by names that don’t sound very German at all. The four most popular 2016 boys’ names in Germany are Liam, Milan, Elias and Levi. Interesting, isn’t it? Don’t tell me you would have guessed. Although I knew that Liam and Elias are in fashion, I have to admit that I was surprised about Milan in particular. Where does that come from? I don’t think that we can safely assume that a considerable part of German parents take their inspiration for naming their male child from Shakira’s son Milan (the only Milan I know and ok, I do sometimes read Gala and Bunte, the German equivalent of Hello and OK, only better). So, just another sign how international in every aspect Germany has become? Or one of super pretentious parents? Whatever it may be, I leave you with news that Julian, Jonas, Linus, Daniel, Alexander and Tim are ranked five to ten, so feel free to pick and choose should you currently be looking for inspiration for your newborn son. Just in case you’re wondering about the girls: with Anna still at number two – has been a favourite for ages – as

well as other classic names such as Laura, Julia, Sarah and Lena all in the top ten, it will be more difficult to judge by a woman’s name alone which decade she was born in. While any German Milan will forever be a giveaway.