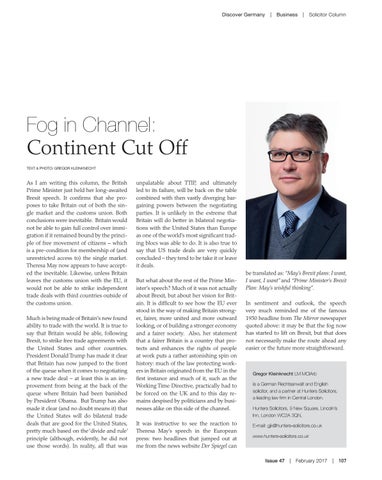 As I am writing this column, the British Prime Minister just held her long-awaited Brexit speech. It confirms that she proposes to take Britain out of both the single market and the customs union. Both conclusions were inevitable. Britain would not be able to gain full control over immigration if it remained bound by the principle of free movement of citizens – which is a pre-condition for membership of (and unrestricted access to) the single market. Theresa May now appears to have accepted the inevitable. Likewise, unless Britain leaves the customs union with the EU, it would not be able to strike independent trade deals with third countries outside of the customs union. Much is being made of Britain’s new found ability to trade with the world. It is true to say that Britain would be able, following Brexit, to strike free trade agreements with the United States and other countries. President Donald Trump has made it clear that Britain has now jumped to the front of the queue when it comes to negotiating a new trade deal – at least this is an improvement from being at the back of the queue where Britain had been banished by President Obama. But Trump has also made it clear (and no doubt means it) that the United States will do bilateral trade deals that are good for the United States, pretty much based on the ‘divide and rule’ principle (although, evidently, he did not use those words). In reality, all that was

unpalatable about TTIP, and ultimately led to its failure, will be back on the table combined with then vastly diverging bargaining powers between the negotiating parties. It is unlikely in the extreme that Britain will do better in bilateral negotiations with the United States than Europe as one of the world’s most significant trading blocs was able to do. It is also true to say that US trade deals are very quickly concluded – they tend to be take it or leave it deals. But what about the rest of the Prime Minister’s speech? Much of it was not actually about Brexit, but about her vision for Britain. It is difficult to see how the EU ever stood in the way of making Britain stronger, fairer, more united and more outward looking, or of building a stronger economy and a fairer society. Also, her statement that a fairer Britain is a country that protects and enhances the rights of people at work puts a rather astonishing spin on history: much of the law protecting workers in Britain originated from the EU in the first instance and much of it, such as the Working Time Directive, practically had to be forced on the UK and to this day remains despised by politicians and by businesses alike on this side of the channel. It was instructive to see the reaction to Theresa May’s speech in the European press: two headlines that jumped out at me from the news website Der Spiegel can

be translated as: “May’s Brexit plans: I want, I want, I want” and “Prime Minister’s Brexit Plan: May’s wishful thinking”. In sentiment and outlook, the speech very much reminded me of the famous 1930 headline from The Mirror newspaper quoted above: it may be that the fog now has started to lift on Brexit, but that does not necessarily make the route ahead any easier or the future more straightforward.