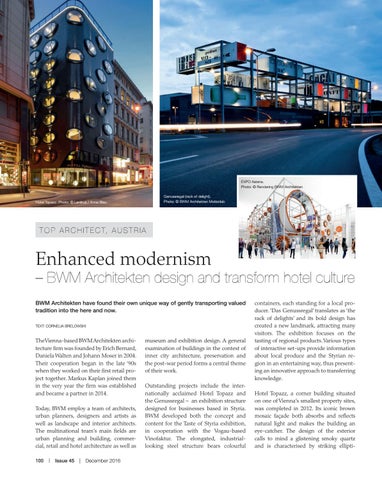 TheVienna-based BWM Architekten architecture firm was founded by Erich Bernard, Daniela Walten and Johann Moser in 2004. Their cooperation began in the late ‘90s when they worked on their first retail project together. Markus Kaplan joined them in the very year the firm was established and became a partner in 2014. Today, BWM employ a team of architects, urban planners, designers and artists as well as landscape and interior architects. The multinational team’s main fields are urban planning and building, commercial, retail and hotel architecture as well as 100  |  Issue 45  |  December 2016

museum and exhibition design. A general examination of buildings in the context of inner city architecture, preservation and the post-war period forms a central theme of their work. Outstanding projects include the internationally acclaimed Hotel Topazz and the Genussregal – an exhibition structure designed for businesses based in Styria. BWM developed both the concept and content for the Taste of Styria exhibition, in cooperation with the Vogau-based Vinofaktur. The elongated, industriallooking steel structure bears colourful

containers, each standing for a local producer. ‘Das Genussregal’ translates as ‘the rack of delights’ and its bold design has created a new landmark, attracting many visitors. The exhibition focuses on the tasting of regional products. Various types of interactive set-ups provide information about local produce and the Styrian region in an entertaining way, thus presenting an innovative approach to transferring knowledge. Hotel Topazz, a corner building situated on one of Vienna’s smallest property sites, was completed in 2012. Its iconic brown mosaic façade both absorbs and reflects natural light and makes the building an eye-catcher. The design of the exterior calls to mind a glistening smoky quartz and is characterised by striking ellipti-