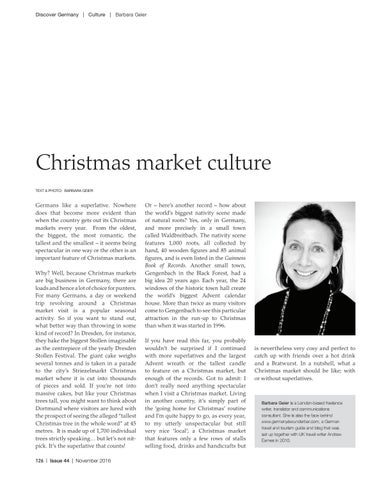 Germans like a superlative. Nowhere does that become more evident than when the country gets out its Christmas markets every year. From the oldest, the biggest, the most romantic, the tallest and the smallest – it seems being spectacular in one way or the other is an important feature of Christmas markets. Why? Well, because Christmas markets are big business in Germany, there are loads and hence a lot of choice for punters. For many Germans, a day or weekend trip revolving around a Christmas market visit is a popular seasonal activity. So if you want to stand out, what better way than throwing in some kind of record? In Dresden, for instance, they bake the biggest Stollen imaginable as the centrepiece of the yearly Dresden Stollen Festival. The giant cake weighs several tonnes and is taken in a parade to the city’s Striezelmarkt Christmas market where it is cut into thousands of pieces and sold. If you’re not into massive cakes, but like your Christmas trees tall, you might want to think about Dortmund where visitors are lured with the prospect of seeing the alleged “tallest Christmas tree in the whole word” at 45 metres. It is made up of 1,700 individual trees strictly speaking… but let’s not nitpick. It’s the superlative that counts! 126 | Issue 44 | November 2016

Or – here’s another record – how about the world’s biggest nativity scene made of natural roots? Yes, only in Germany, and more precisely in a small town called Waldbreitbach. The nativity scene features 1,000 roots, all collected by hand, 40 wooden figures and 85 animal figures, and is even listed in the Guinness Book of Records. Another small town, Gengenbach in the Black Forest, had a big idea 20 years ago. Each year, the 24 windows of the historic town hall create the world’s biggest Advent calendar house. More than twice as many visitors come to Gengenbach to see this particular attraction in the run-up to Christmas than when it was started in 1996. If you have read this far, you probably wouldn’t be surprised if I continued with more superlatives and the largest Advent wreath or the tallest candle to feature on a Christmas market, but enough of the records. Got to admit: I don’t really need anything spectacular when I visit a Christmas market. Living in another country, it’s simply part of the ‘going home for Christmas’ routine and I’m quite happy to go, as every year, to my utterly unspectacular but still very nice ‘local’; a Christmas market that features only a few rows of stalls selling food, drinks and handicrafts but

is nevertheless very cosy and perfect to catch up with friends over a hot drink and a Bratwurst. In a nutshell, what a Christmas market should be like; with or without superlatives.