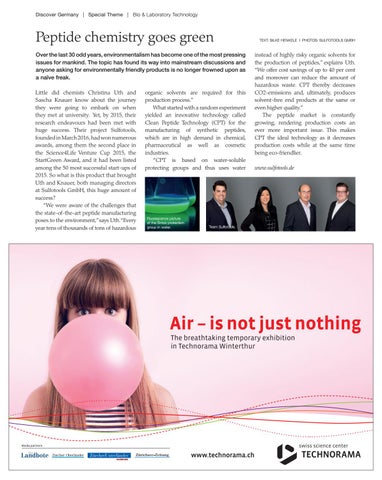 Peptide chemistry goes green Over the last 30 odd years, environmentalism has become one of the most pressing issues for mankind. The topic has found its way into mainstream discussions and anyone asking for environmentally friendly products is no longer frowned upon as a naïve freak. Little did chemists Christina Uth and Sascha Knauer know about the journey they were going to embark on when they met at university. Yet, by 2015, their research endeavours had been met with huge success. Their project Sulfotools, founded in March 2016, had won numerous awards, among them the second place in the Science4Life Venture Cup 2015, the StartGreen Award, and it had been listed among the 50 most successful start-ups of 2015. So what is this product that brought Uth and Knauer, both managing directors at Sulfotools GmbH, this huge amount of success? “We were aware of the challenges that the state-of-the-art peptide manufacturing poses to the environment,” says Uth.“Every year tens of thousands of tons of hazardous

organic solvents are required for this production process.” What started with a random experiment yielded an innovative technology called Clean Peptide Technology (CPT) for the manufacturing of synthetic peptides, which are in high demand in chemical, pharmaceutical as well as cosmetic industries. “CPT is based on water-soluble protecting groups and thus uses water

Fluorescence picture of the Smoc protection group in water.

instead of highly risky organic solvents for the production of peptides,” explains Uth. “We offer cost savings of up to 40 per cent and moreover can reduce the amount of hazardous waste. CPT thereby decreases CO2-emissions and, ultimately, produces solvent-free end products at the same or even higher quality.” The peptide market is constantly growing, rendering production costs an ever more important issue. This makes CPT the ideal technology as it decreases production costs while at the same time being eco-friendlier. www.sulfotools.de