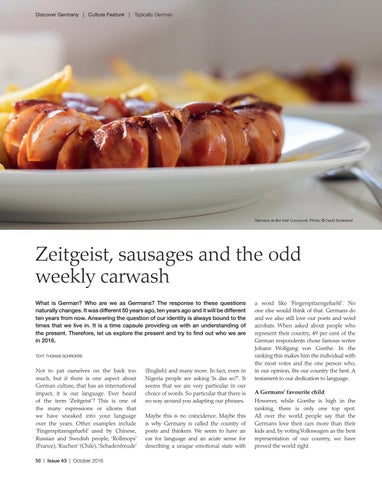 Zeitgeist, sausages and the odd weekly carwash What is German? Who are we as Germans? The response to these questions naturally changes. It was different 50 years ago, ten years ago and it will be different ten years from now. Answering the question of our identity is always bound to the times that we live in. It is a time capsule providing us with an understanding of the present. Therefore, let us explore the present and try to find out who we are in 2016. TEXT: THOMAS SCHROERS

Not to pat ourselves on the back too much, but if there is one aspect about German culture, that has an international impact, it is our language. Ever heard of the term ‘Zeitgeist’? This is one of the many expressions or idioms that we have sneaked into your language over the years. Other examples include ‘Fingerspitzengefuehl’ used by Chinese, Russian and Swedish people, ‘Rollmops’ (France), ‘Kuchen’ (Chile), ‘Schadenfreude’ 50 | Issue 43 | October 2016

(English) and many more. In fact, even in Nigeria people are asking ‘Is das so?’. It seems that we are very particular in our choice of words. So particular that there is no way around you adapting our phrases. Maybe this is no coincidence. Maybe this is why Germany is called the country of poets and thinkers. We seem to have an ear for language and an acute sense for describing a unique emotional state with

a word like ‘Fingerspitzengefuehl’. No one else would think of that. Germans do and we also still love our poets and word acrobats. When asked about people who represent their country, 49 per cent of the German respondents chose famous writer Johann Wolfgang von Goethe. In the ranking this makes him the individual with the most votes and the one person who, in our opinion, fits our country the best. A testament to our dedication to language. A Germans’ favourite child However, while Goethe is high in the ranking, there is only one top spot. All over the world people say that the Germans love their cars more than their kids and, by voting Volkswagen as the best representation of our country, we have proved the world right.