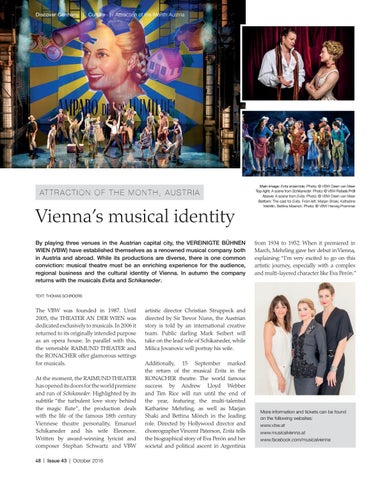 Vienna’s musical identity By playing three venues in the Austrian capital city, the VEREINIGTE BÜHNEN WIEN (VBW) have established themselves as a renowned musical company both in Austria and abroad. While its productions are diverse, there is one common conviction: musical theatre must be an enriching experience for the audience, regional business and the cultural identity of Vienna. In autumn the company returns with the musicals Evita and Schikaneder.

from 1934 to 1952. When it premiered in March, Mehrling gave her debut in Vienna, explaining: “I’m very excited to go on this artistic journey, especially with a complex and multi-layered character like Eva Perón.”

The VBW was founded in 1987. Until 2005, the THEATER AN DER WIEN was dedicated exclusively to musicals. In 2006 it returned to its originally intended purpose as an opera house. In parallel with this, the venerable RAIMUND THEATER and the RONACHER offer glamorous settings for musicals. At the moment, the RAIMUND THEATER has opened its doors for the world premiere and run of Schikaneder. Highlighted by its subtitle “the turbulent love story behind the magic flute”, the production deals with the life of the famous 18th century Viennese theatre personality, Emanuel Schikaneder and his wife Eleonore. Written by award-winning lyricist and composer Stephan Schwartz and VBW 48 | Issue 43 | October 2016

artistic director Christian Struppeck and directed by Sir Trevor Nunn, the Austrian story is told by an international creative team. Public darling Mark Seibert will take on the lead role of Schikaneder, while Milica Jovanovic will portray his wife. Additionally, 15 September marked the return of the musical Evita in the RONACHER theatre. The world famous success by Andrew Lloyd Webber and Tim Rice will run until the end of the year, featuring the multi-talented Katharine Mehrling, as well as Marjan Shaki and Bettina Mönch in the leading role. Directed by Hollywood director and choreographer Vincent Paterson, Evita tells the biographical story of Eva Perón and her societal and political ascent in Argentinia