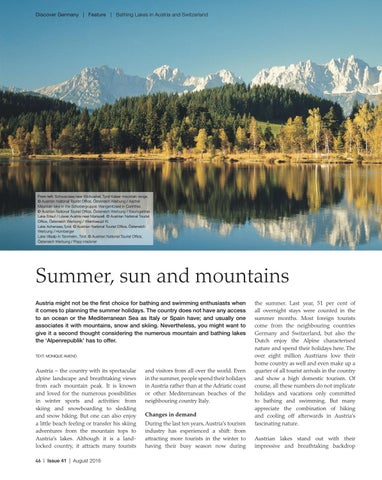 Summer, sun and mountains Austria might not be the first choice for bathing and swimming enthusiasts when it comes to planning the summer holidays. The country does not have any access to an ocean or the Mediterranean Sea as Italy or Spain have; and usually one associates it with mountains, snow and skiing. Nevertheless, you might want to give it a second thought considering the numerous mountain and bathing lakes the ‘Alpenrepublik’ has to offer. TEXT: MONIQUE AMEND

Austria – the country with its spectacular alpine landscape and breathtaking views from each mountain peak. It is known and loved for the numerous possibilities in winter sports and activities: from skiing and snowboarding to sledding and snow hiking. But one can also enjoy a little beach feeling or transfer his skiing adventures from the mountain tops to Austria’s lakes. Although it is a landlocked country, it attracts many tourists 46 | Issue 41 | August 2016

and visitors from all over the world. Even in the summer, people spend their holidays in Austria rather than at the Adriatic coast or other Mediterranean beaches of the neighbouring country Italy. Changes in demand During the last ten years, Austria’s tourism industry has experienced a shift: from attracting more tourists in the winter to having their busy season now during

the summer. Last year, 51 per cent of all overnight stays were counted in the summer months. Most foreign tourists come from the neighbouring countries Germany and Switzerland, but also the Dutch enjoy the Alpine characterised nature and spend their holidays here. The over eight million Austrians love their home country as well and even make up a quarter of all tourist arrivals in the country and show a high domestic tourism. Of course, all these numbers do not implicate holidays and vacations only committed to bathing and swimming. But many appreciate the combination of hiking and cooling off afterwards in Austria’s fascinating nature. Austrian lakes stand out with their impressive and breathtaking backdrop