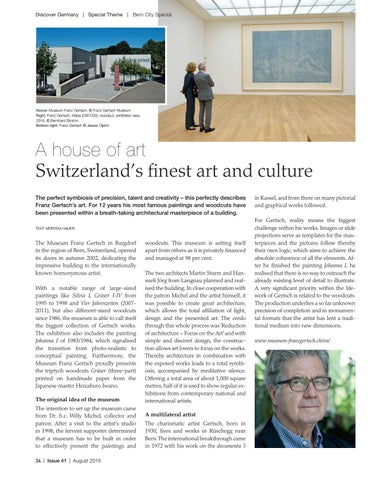 A house of art Switzerland’s finest art and culture The perfect symbiosis of precision, talent and creativity – this perfectly describes Franz Gertsch’s art. For 12 years his most famous paintings and woodcuts have been presented within a breath-taking architectural masterpiece of a building. TEXT: MERYEM HAUER

The Museum Franz Gertsch in Burgdorf in the region of Bern, Switzerland, opened its doors in autumn 2002, dedicating the impressive building to the internationally known homonymous artist. With a notable range of large-sized paintings like Silvia I, Gräser I-IV from 1995 to 1998 and Vier Jahreszeiten (20072011), but also different-sized woodcuts since 1986, the museum is able to call itself the biggest collection of Gertsch works. The exhibition also includes the painting Johanna I of 1983/1984, which signalised the transition from photo-realistic to conceptual painting. Furthermore, the Museum Franz Gertsch proudly presents the triptych woodcuts Gräser (three-part) printed on handmade paper from the Japanese master Heizaburo Iwano. The original idea of the museum The intention to set up the museum came from Dr. h.c. Willy Michel, collector and patron. After a visit to the artist’s studio in 1998, the fervent supporter determined that a museum has to be built in order to effectively present the paintings and 34 | Issue 41 | August 2016

woodcuts. This museum is setting itself apart from others as it is privately financed and managed at 98 per cent. The two architects Martin Sturm and Hansueli Jörg from Langnau planned and realised the building. In close cooperation with the patron Michel and the artist himself, it was possible to create great architecture, which allows the total affiliation of light, design and the presented art. The credo through this whole process was ‘Reduction of architecture – Focus on the Art’ and with simple and discreet design, the construction allows art lovers to focus on the works. Thereby architecture in combination with the exposed works leads to a total symbiosis, accompanied by meditative silence. Offering a total area of about 1,000 square metres, half of it is used to show regular exhibitions from contemporary national and international artists. A multilateral artist The charismatic artist Gertsch, born in 1930, lives and works in Rüschegg near Bern. The international breakthrough came in 1972 with his work on the documenta 5

in Kassel, and from there on many pictorial and graphical works followed. For Gertsch, reality means the biggest challenge within his works. Images or slide projections serve as templates for the masterpieces and the pictures follow thereby their own logic, which aims to achieve the absolute coherence of all the elements. After he finished the painting Johanna I, he realised that there is no way to outreach the already existing level of detail to illustrate. A very significant priority within the lifework of Gertsch is related to the woodcuts. The production underlies a so far unknown precision of completion and in monumental formats that the artist has lent a traditional medium into new dimensions. www.museum-franzgertsch.ch/en/