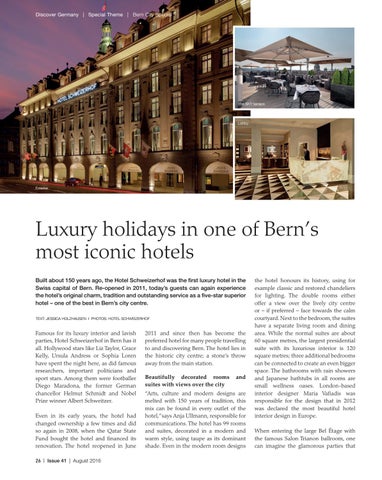 Luxury holidays in one of Bern’s most iconic hotels Built about 150 years ago, the Hotel Schweizerhof was the first luxury hotel in the Swiss capital of Bern. Re-opened in 2011, today’s guests can again experience the hotel’s original charm, tradition and outstanding service as a five-star superior hotel – one of the best in Bern’s city centre. TEXT: JESSICA HOLZHAUSEN I PHOTOS: HOTEL SCHWEIZERHOF

Famous for its luxury interior and lavish parties, Hotel Schweizerhof in Bern has it all. Hollywood stars like Liz Taylor, Grace Kelly, Ursula Andress or Sophia Loren have spent the night here, as did famous researchers, important politicians and sport stars. Among them were footballer Diego Maradona, the former German chancellor Helmut Schmidt and Nobel Prize winner Albert Schweitzer. Even in its early years, the hotel had changed ownership a few times and did so again in 2008, when the Qatar State Fund bought the hotel and financed its renovation. The hotel reopened in June 26 | Issue 41 | August 2016

2011 and since then has become the preferred hotel for many people travelling to and discovering Bern. The hotel lies in the historic city centre; a stone’s throw away from the main station. Beautifully decorated rooms suites with views over the city

“Arts, culture and modern designs are melted with 150 years of tradition, this mix can be found in every outlet of the hotel,” says Anja Ullmann, responsible for communications. The hotel has 99 rooms and suites, decorated in a modern and warm style, using taupe as its dominant shade. Even in the modern room designs

the hotel honours its history, using for example classic and restored chandeliers for lighting. The double rooms either offer a view over the lively city centre or – if preferred – face towards the calm courtyard. Next to the bedroom, the suites have a separate living room and dining area. While the normal suites are about 60 square metres, the largest presidential suite with its luxurious interior is 120 square metres; three additional bedrooms can be connected to create an even bigger space. The bathrooms with rain showers and Japanese bathtubs in all rooms are small wellness oases. London-based interior designer Maria Vafiadis was responsible for the design that in 2012 was declared the most beautiful hotel interior design in Europe. When entering the large Bel Étage with the famous Salon Trianon ballroom, one can imagine the glamorous parties that