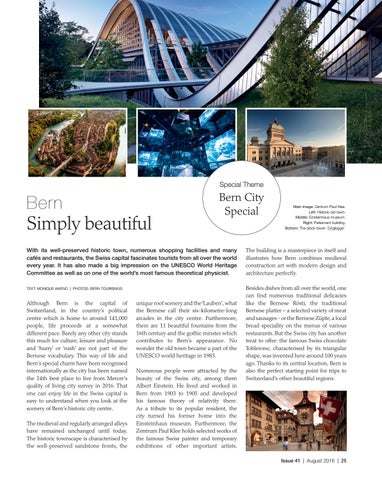 With its well-preserved historic town, numerous shopping facilities and many cafés and restaurants, the Swiss capital fascinates tourists from all over the world every year. It has also made a big impression on the UNESCO World Heritage Committee as well as on one of the world’s most famous theoretical physicist.

The building is a masterpiece in itself and illustrates how Bern combines medieval construction art with modern design and architecture perfectly.

Besides dishes from all over the world, one can find numerous traditional delicacies like the Bernese Rösti, the traditional Bernese platter – a selected variety of meat and sausages - or the Bernese Züpfe, a local bread speciality on the menus of various restaurants. But the Swiss city has another treat to offer: the famous Swiss chocolate Toblerone, characterised by its triangular shape, was invented here around 100 years ago. Thanks to its central location, Bern is also the perfect starting point for trips to Switzerland’s other beautiful regions.

Although Bern is the capital of Switzerland, in the country’s political centre which is home to around 141,000 people, life proceeds at a somewhat different pace. Barely any other city stands this much for culture, leisure and pleasure and ‘hurry’ or ‘rush’ are not part of the Bernese vocabulary. This way of life and Bern’s special charm have been recognised internationally as the city has been named the 14th best place to live from Mercer’s quality of living city survey in 2016. That one can enjoy life in the Swiss capital is easy to understand when you look at the scenery of Bern’s historic city centre. The medieval and regularly arranged alleys have remained unchanged until today. The historic townscape is characterised by the well-preserved sandstone fronts, the

unique roof scenery and the‘Lauben’, what the Bernese call their six-kilometre-long arcades in the city centre. Furthermore, there are 11 beautiful fountains from the 16th century and the gothic minster which contributes to Bern’s appearance. No wonder the old town became a part of the UNESCO world heritage in 1983. Numerous people were attracted by the beauty of the Swiss city, among them Albert Einstein. He lived and worked in Bern from 1903 to 1905 and developed his famous theory of relativity there. As a tribute to its popular resident, the city turned his former home into the Einsteinhaus museum. Furthermore, the Zentrum Paul Klee holds selected works of the famous Swiss painter and temporary exhibitions of other important artists.