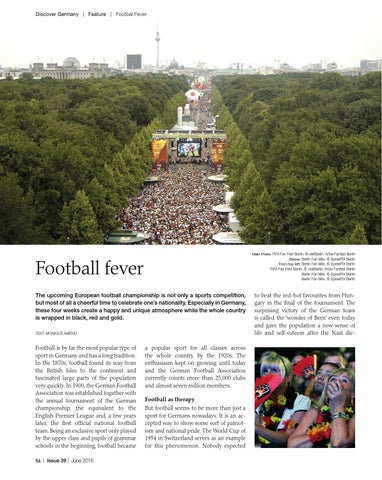 Football fever The upcoming European football championship is not only a sports competition, but most of all a cheerful time to celebrate one’s nationality. Especially in Germany, these four weeks create a happy and unique atmosphere while the whole country is wrapped in black, red and gold. TEXT: MONIQUE AMEND

Football is by far the most popular type of sport in Germany and has a long tradition. In the 1870s, football found its way from the British Isles to the continent and fascinated large parts of the population very quickly. In 1900, the German Football Association was established together with the annual tournament of the German championship, the equivalent to the English Premier League and, a few years later, the first official national football team. Being an exclusive sport only played by the upper class and pupils of grammar schools in the beginning, football became 56 | Issue 39 | June 2016

a popular sport for all classes across the whole country by the 1920s. The enthusiasm kept on growing until today and the German Football Association currently counts more than 25,000 clubs and almost seven million members. Football as therapy But football seems to be more than just a sport for Germans nowadays. It is an accepted way to show some sort of patriotism and national pride. The World Cup of 1954 in Switzerland serves as an example for this phenomenon. Nobody expected

to beat the red-hot favourites from Hungary in the final of the tournament. The surprising victory of the German team is called the ‘wonder of Bern’ even today and gave the population a new sense of life and self-esteem after the Nazi dic-