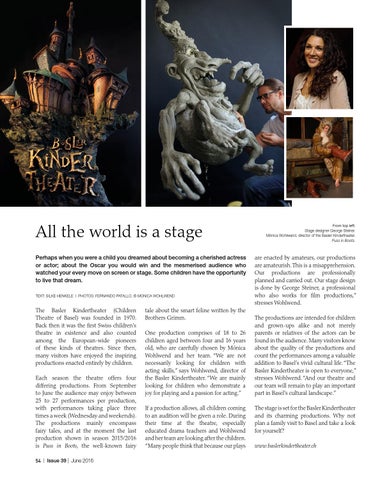 All the world is a stage Perhaps when you were a child you dreamed about becoming a cherished actress or actor; about the Oscar you would win and the mesmerised audience who watched your every move on screen or stage. Some children have the opportunity to live that dream. TEXT: SILKE HENKELE I PHOTOS: FERNANDO PATALLO, © MONICA WOHLWEND

The Basler Kindertheater (Children Theatre of Basel) was founded in 1970. Back then it was the first Swiss children’s theatre in existence and also counted among the European-wide pioneers of these kinds of theatres. Since then, many visitors have enjoyed the inspiring productions enacted entirely by children. Each season the theatre offers four differing productions. From September to June the audience may enjoy between 25 to 27 performances per production, with performances taking place three times a week (Wednesday and weekends). The productions mainly encompass fairy tales, and at the moment the last production shown in season 2015/2016 is Puss in Boots, the well-known fairy 54 | Issue 39 | June 2016

tale about the smart feline written by the Brothers Grimm. One production comprises of 18 to 26 children aged between four and 16 years old, who are carefully chosen by Mónica Wohlwend and her team. “We are not necessarily looking for children with acting skills,” says Wohlwend, director of the Basler Kindertheater. “We are mainly looking for children who demonstrate a joy for playing and a passion for acting.” If a production allows, all children coming to an audition will be given a role. During their time at the theatre, especially educated drama teachers and Wohlwend and her team are looking after the children. “Many people think that because our plays

are enacted by amateurs, our productions are amateurish. This is a misapprehension. Our productions are professionally planned and carried out. Our stage design is done by George Steiner, a professional who also works for film productions,” stresses Wohlwend. The productions are intended for children and grown-ups alike and not merely parents or relatives of the actors can be found in the audience. Many visitors know about the quality of the productions and count the performances among a valuable addition to Basel’s vivid cultural life. “The Basler Kindertheater is open to everyone,” stresses Wohlwend. “And our theatre and our team will remain to play an important part in Basel’s cultural landscape.” The stage is set for the Basler Kindertheater and its charming productions. Why not plan a family visit to Basel and take a look for yourself? www.baslerkindertheater.ch