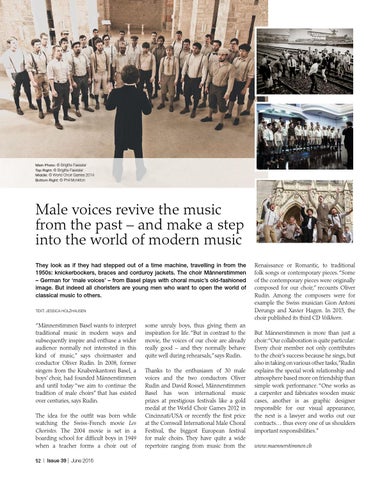 Male voices revive the music from the past – and make a step into the world of modern music They look as if they had stepped out of a time machine, travelling in from the 1950s: knickerbockers, braces and corduroy jackets. The choir Männerstimmen – German for ‘male voices’ – from Basel plays with choral music’s old-fashioned image. But indeed all choristers are young men who want to open the world of classical music to others. TEXT: JESSICA HOLZHAUSEN

“Männerstimmen Basel wants to interpret traditional music in modern ways and subsequently inspire and enthuse a wider audience normally not interested in this kind of music,” says choirmaster and conductor Oliver Rudin. In 2008, former singers from the Knabenkantorei Basel, a boys’ choir, had founded Männerstimmen and until today “we aim to continue the tradition of male choirs” that has existed over centuries, says Rudin. The idea for the outfit was born while watching the Swiss-French movie Les Choristes. The 2004 movie is set in a boarding school for difficult boys in 1949 when a teacher forms a choir out of 52 | Issue 39 | June 2016

some unruly boys, thus giving them an inspiration for life. “But in contrast to the movie, the voices of our choir are already really good – and they normally behave quite well during rehearsals,” says Rudin. Thanks to the enthusiasm of 30 male voices and the two conductors Oliver Rudin and David Rossel, Männerstimmen Basel has won international music prizes at prestigious festivals like a gold medal at the World Choir Games 2012 in Cincinnati/USA or recently the first price at the Cornwall International Male Choral Festival, the biggest European festival for male choirs. They have quite a wide repertoire ranging from music from the

Renaissance or Romantic, to traditional folk songs or contemporary pieces. “Some of the contemporary pieces were originally composed for our choir,” recounts Oliver Rudin. Among the composers were for example the Swiss musician Gion Antoni Derungs and Xavier Hagen. In 2015, the choir published its third CD Volkhorn. But Männerstimmen is more than just a choir:“Our collaboration is quite particular: Every choir member not only contributes to the choir’s success because he sings, but also in taking on various other tasks,”Rudin explains the special work relationship and atmosphere based more on friendship than simple work performance. “One works as a carpenter and fabricates wooden music cases, another is as graphic designer responsible for our visual appearance, the next is a lawyer and works out our contracts… thus every one of us shoulders important responsibilities.” www.maennerstimmen.ch