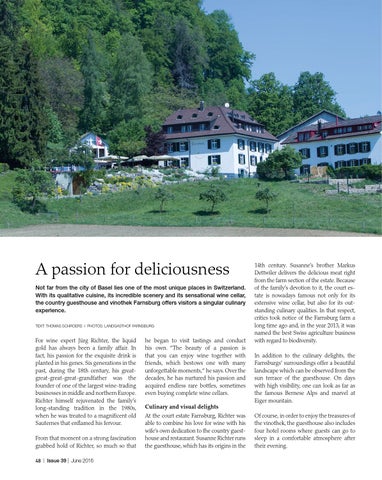 A passion for deliciousness Not far from the city of Basel lies one of the most unique places in Switzerland. With its qualitative cuisine, its incredible scenery and its sensational wine cellar, the country guesthouse and vinothek Farnsburg offers visitors a singular culinary experience. TEXT: THOMAS SCHROERS I PHOTOS: LANDGASTHOF FARNSBURG

For wine expert Jürg Richter, the liquid gold has always been a family affair. In fact, his passion for the exquisite drink is planted in his genes. Six generations in the past, during the 18th century, his greatgreat-great-great-grandfather was the founder of one of the largest wine-trading businesses in middle and northern Europe. Richter himself rejuvenated the family’s long-standing tradition in the 1980s, when he was treated to a magnificent old Sauternes that enflamed his fervour. From that moment on a strong fascination grabbed hold of Richter, so much so that 48 | Issue 39 | June 2016

he began to visit tastings and conduct his own. “The beauty of a passion is that you can enjoy wine together with friends, which bestows one with many unforgettable moments,“ he says. Over the decades, he has nurtured his passion and acquired endless rare bottles, sometimes even buying complete wine cellars. Culinary and visual delights At the court estate Farnsburg, Richter was able to combine his love for wine with his wife’s own dedication to the country guesthouse and restaurant. Susanne Richter runs the guesthouse, which has its origins in the

14th century. Susanne’s brother Markus Dettwiler delivers the delicious meat right from the farm section of the estate. Because of the family’s devotion to it, the court estate is nowadays famous not only for its extensive wine cellar, but also for its outstanding culinary qualities. In that respect, critics took notice of the Farnsburg farm a long time ago and, in the year 2013, it was named the best Swiss agriculture business with regard to biodiversity. In addition to the culinary delights, the Farnsburgs‘ surroundings offer a beautiful landscape which can be observed from the sun terrace of the guesthouse. On days with high visibility, one can look as far as the famous Bernese Alps and marvel at Eiger mountain. Of course, in order to enjoy the treasures of the vinothek, the guesthouse also includes four hotel rooms where guests can go to sleep in a comfortable atmosphere after their evening.