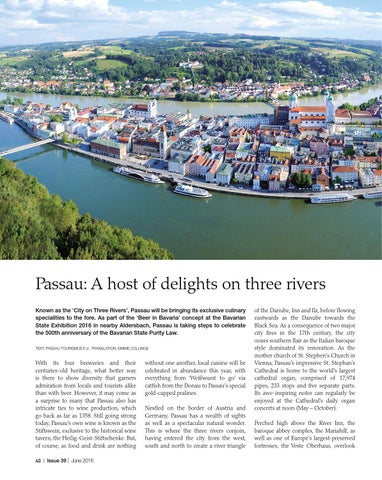 Passau: A host of delights on three rivers Known as the ‘City on Three Rivers’, Passau will be bringing its exclusive culinary specialities to the fore. As part of the ‘Beer in Bavaria’ concept at the Bavarian State Exhibition 2016 in nearby Aldersbach, Passau is taking steps to celebrate the 500th anniversary of the Bavarian State Purity Law. TEXT: PASSAU TOURISMUS E.V., TRANSLATION: EMMIE COLLINGE

With its four breweries and their centuries-old heritage, what better way is there to show diversity that garners admiration from locals and tourists alike than with beer. However, it may come as a surprise to many that Passau also has intricate ties to wine production, which go back as far as 1358. Still going strong today, Passau’s own wine is known as the Stiftswein, exclusive to the historical wine tavern, the Heilig-Geist-Stiftschenke. But, of course, as food and drink are nothing 40 | Issue 39 | June 2016

without one another, local cuisine will be celebrated in abundance this year, with everything from ‘Weißwurst to go’ via catfish from the Donau to Passau’s special gold-capped pralines. Nestled on the border of Austria and Germany, Passau has a wealth of sights as well as a spectacular natural wonder. This is where the three rivers conjoin, having entered the city from the west, south and north to create a river triangle

of the Danube, Inn and Ilz, before flowing eastwards as the Danube towards the Black Sea. As a consequence of two major city fires in the 17th century, the city oozes southern flair as the Italian baroque style dominated its renovation. As the mother church of St. Stephen’s Church in Vienna, Passau’s impressive St. Stephan’s Cathedral is home to the world’s largest cathedral organ, comprised of 17,974 pipes, 233 stops and five separate parts. Its awe-inspiring notes can regularly be enjoyed at the Cathedral’s daily organ concerts at noon (May – October). Perched high above the River Inn, the baroque abbey complex, the Mariahilf, as well as one of Europe’s largest-preserved fortresses, the Veste Oberhaus, overlook