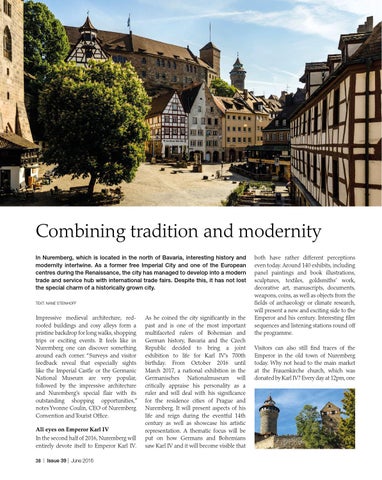 Combining tradition and modernity In Nuremberg, which is located in the north of Bavaria, interesting history and modernity intertwine. As a former free Imperial City and one of the European centres during the Renaissance, the city has managed to develop into a modern trade and service hub with international trade fairs. Despite this, it has not lost the special charm of a historically grown city. TEXT: NANE STEINHOFF

Impressive medieval architecture, redroofed buildings and cosy alleys form a pristine backdrop for long walks, shopping trips or exciting events. It feels like in Nuremberg one can discover something around each corner. “Surveys and visitor feedback reveal that especially sights like the Imperial Castle or the Germanic National Museum are very popular, followed by the impressive architecture and Nuremberg’s special flair with its outstanding shopping opportunities,” notes Yvonne Coulin, CEO of Nuremberg Convention and Tourist Office. All eyes on Emperor Karl IV In the second half of 2016, Nuremberg will entirely devote itself to Emperor Karl IV. 38 | Issue 39 | June 2016

As he coined the city significantly in the past and is one of the most important multifaceted rulers of Bohemian and German history, Bavaria and the Czech Republic decided to bring a joint exhibition to life for Karl IV’s 700th birthday. From October 2016 until March 2017, a national exhibition in the Germanisches Nationalmuseum will critically appraise his personality as a ruler and will deal with his significance for the residence cities of Prague and Nuremberg. It will present aspects of his life and reign during the eventful 14th century as well as showcase his artistic representation. A thematic focus will be put on how Germans and Bohemians saw Karl IV and it will become visible that

both have rather different perceptions even today. Around 140 exhibits, including panel paintings and book illustrations, sculptures, textiles, goldsmiths’ work, decorative art, manuscripts, documents, weapons, coins, as well as objects from the fields of archaeology or climate research, will present a new and exciting side to the Emperor and his century. Interesting film sequences and listening stations round off the programme. Visitors can also still find traces of the Emperor in the old town of Nuremberg today. Why not head to the main market at the Frauenkirche church, which was donated by Karl IV? Every day at 12pm, one