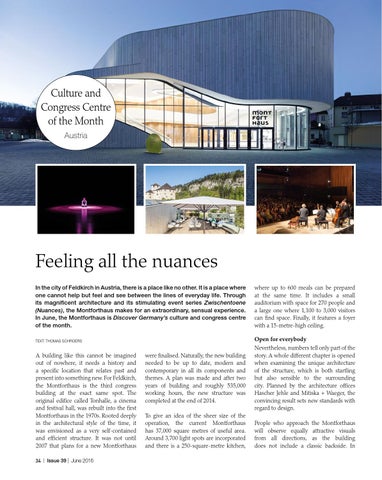 Culture and Congress Centre of the Month Austria

Feeling all the nuances In the city of Feldkirch in Austria, there is a place like no other. It is a place where one cannot help but feel and see between the lines of everyday life. Through its magnificent architecture and its stimulating event series Zwischentoene (Nuances), the Montforthaus makes for an extraordinary, sensual experience. In June, the Montforthaus is Discover Germanyâ&amp;#x20AC;&amp;#x2122;s culture and congress centre of the month.

where up to 600 meals can be prepared at the same time. It includes a small auditorium with space for 270 people and a large one where 1,100 to 3,000 visitors can find space. Finally, it features a foyer with a 15-metre-high ceiling.

A building like this cannot be imagined out of nowhere, it needs a history and a specific location that relates past and present into something new. For Feldkirch, the Montforthaus is the third congress building at the exact same spot. The original edifice called Tonhalle, a cinema and festival hall, was rebuilt into the first Montforthaus in the 1970s. Rooted deeply in the architectural style of the time, it was envisioned as a very self-contained and efficient structure. It was not until 2007 that plans for a new Montforthaus 34 | Issue 39 | June 2016

were finalised. Naturally, the new building needed to be up to date, modern and contemporary in all its components and themes. A plan was made and after two years of building and roughly 535,000 working hours, the new structure was completed at the end of 2014. To give an idea of the sheer size of the operation, the current Montforthaus has 37,000 square metres of useful area. Around 3,700 light spots are incorporated and there is a 250-square-metre kitchen,

Nevertheless, numbers tell only part of the story. A whole different chapter is opened when examining the unique architecture of the structure, which is both startling but also sensible to the surrounding city. Planned by the architecture offices Hascher Jehle and Mitiska + Waeger, the convincing result sets new standards with regard to design. People who approach the Montforthaus will observe equally attractive visuals from all directions, as the building does not include a classic backside. In