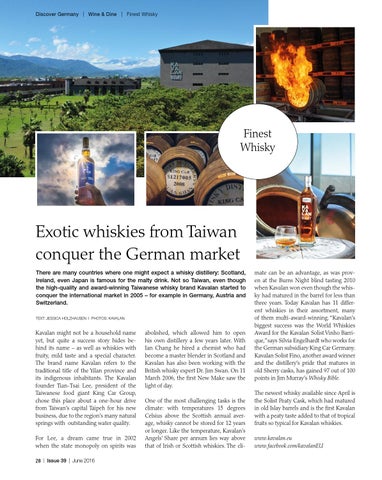 Exotic whiskies from Taiwan conquer the German market There are many countries where one might expect a whisky distillery: Scotland, Ireland, even Japan is famous for the malty drink. Not so Taiwan, even though the high-quality and award-winning Taiwanese whisky brand Kavalan started to conquer the international market in 2005 – for example in Germany, Austria and Switzerland. TEXT: JESSICA HOLZHAUSEN I PHOTOS: KAVALAN

Kavalan might not be a household name yet, but quite a success story hides behind its name – as well as whiskies with fruity, mild taste and a special character. The brand name Kavalan refers to the traditional title of the Yilan province and its indigenous inhabitants. The Kavalan founder Tian-Tsai Lee, president of the Taiwanese food giant King Car Group, chose this place about a one-hour drive from Taiwan’s capital Taipeh for his new business, due to the region’s many natural springs with outstanding water quality. For Lee, a dream came true in 2002 when the state monopoly on spirits was 28 | Issue 39 | June 2016

abolished, which allowed him to open his own distillery a few years later. With Ian Chang he hired a chemist who had become a master blender in Scotland and Kavalan has also been working with the British whisky expert Dr. Jim Swan. On 11 March 2006, the first New Make saw the light of day. One of the most challenging tasks is the climate: with temperatures 15 degrees Celsius above the Scottish annual average, whisky cannot be stored for 12 years or longer. Like the temperature, Kavalan’s Angels’ Share per annum lies way above that of Irish or Scottish whiskies. The cli-

mate can be an advantage, as was proven at the Burns Night blind tasting 2010 when Kavalan won even though the whisky had matured in the barrel for less than three years. Today Kavalan has 11 different whiskies in their assortment, many of them multi-award-winning. “Kavalan’s biggest success was the World Whiskies Award for the Kavalan Solist Vinho Barrique,” says Silvia Engelhardt who works for the German subsidiary King Car Germany. Kavalan Solist Fino, another award winner and the distillery’s pride that matures in old Sherry casks, has gained 97 out of 100 points in Jim Murray’s Whisky Bible. The newest whisky available since April is the Solist Peaty Cask, which had matured in old Islay barrels and is the first Kavalan with a peaty taste added to that of tropical fruits so typical for Kavalan whiskies. www.kavalan.eu www.facebook.com/kavalanEU