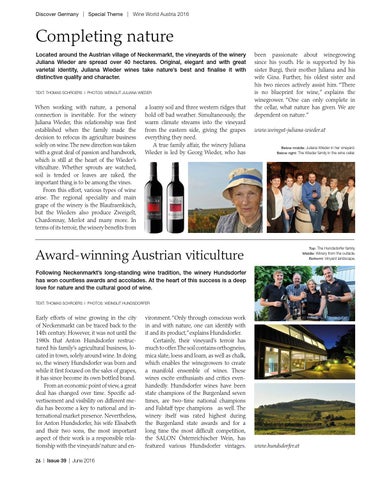 Completing nature Located around the Austrian village of Neckenmarkt, the vineyards of the winery Juliana Wieder are spread over 40 hectares. Original, elegant and with great varietal identity, Juliana Wieder wines take nature’s best and finalise it with distinctive quality and character. TEXT: THOMAS SCHROERS I PHOTOS: WEINGUT JULIANA WIEDER

When working with nature, a personal connection is inevitable. For the winery Juliana Wieder, this relationship was first established when the family made the decision to refocus its agriculture business solely on wine. The new direction was taken with a great deal of passion and handwork, which is still at the heart of the Wieder’s viticulture. Whether sprouts are watched, soil is tended or leaves are raked, the important thing is to be among the vines. From this effort, various types of wine arise. The regional speciality and main grape of the winery is the Blaufraenkisch, but the Wieders also produce Zweigelt, Chardonnay, Merlot and many more. In terms of its terroir, the winery benefits from

a loamy soil and three western ridges that hold off bad weather. Simultaneously, the warm climate streams into the vineyard from the eastern side, giving the grapes everything they need. A true family affair, the winery Juliana Wieder is led by Georg Wieder, who has

been passionate about winegrowing since his youth. He is supported by his sister Burgi, their mother Juliana and his wife Gina. Further, his oldest sister and his two nieces actively assist him. “There is no blueprint for wine,” explains the winegrower. “One can only complete in the cellar, what nature has given. We are dependent on nature.” www.weingut-juliana-wieder.at Below middle: Juliana Wieder in her vineyard. Below right: The Wieder family in the wine cellar.

Top: The Hundsdorfer family. Middle: Winery from the outside. Bottomt: Vinyard landscape.

Award-winning Austrian viticulture Following Neckenmarkt’s long-standing wine tradition, the winery Hundsdorfer has won countless awards and accolades. At the heart of this success is a deep love for nature and the cultural good of wine. TEXT: THOMAS SCHROERS I PHOTOS: WEINGUT HUNDSDORFER

Early efforts of wine growing in the city of Neckenmarkt can be traced back to the 14th century. However, it was not until the 1980s that Anton Hundsdorfer restructured his family’s agricultural business, located in town, solely around wine. In doing so, the winery Hundsdorfer was born and while it first focused on the sales of grapes, it has since become its own bottled brand. From an economic point of view, a great deal has changed over time. Specific advertisement and visibility on different media has become a key to national and international market presence. Nevertheless, for Anton Hundsdorfer, his wife Elisabeth and their two sons, the most important aspect of their work is a responsible relationship with the vineyards’ nature and en26 | Issue 39 | June 2016

vironment. “Only through conscious work in and with nature, one can identify with it and its product,” explains Hundsdorfer. Certainly, their vineyard’s terroir has much to offer.The soil contains orthogneiss, mica slate, loess and loam, as well as chalk, which enables the winegrowers to create a manifold ensemble of wines. These wines excite enthusiasts and critics evenhandedly. Hundsdorfer wines have been state champions of the Burgenland seven times, are two-time national champions and Falstaff type champions as well. The winery itself was rated highest during the Burgenland state awards and for a long time the most difficult competition, the SALON Österreichischer Wein, has featured various Hundsdorfer vintages.