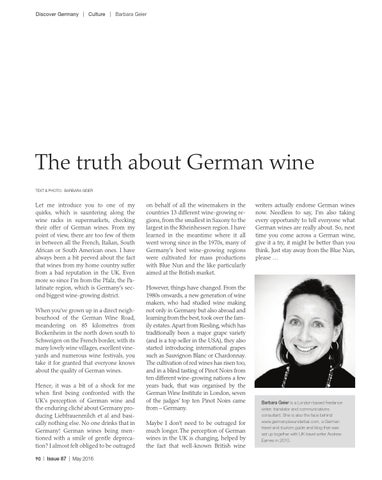 Let me introduce you to one of my quirks, which is sauntering along the wine racks in supermarkets, checking their offer of German wines. From my point of view, there are too few of them in between all the French, Italian, South African or South American ones. I have always been a bit peeved about the fact that wines from my home country suffer from a bad reputation in the UK. Even more so since I’m from the Pfalz, the Palatinate region, which is Germany’s second biggest wine-growing district. When you’ve grown up in a direct neighbourhood of the German Wine Road, meandering on 85 kilometres from Bockenheim in the north down south to Schweigen on the French border, with its many lovely wine villages, excellent vineyards and numerous wine festivals, you take it for granted that everyone knows about the quality of German wines. Hence, it was a bit of a shock for me when first being confronted with the UK’s perception of German wine and the enduring cliché about Germany producing Liebfrauenmilch et al and basically nothing else. No one drinks that in Germany! German wines being mentioned with a smile of gentle deprecation? I almost felt obliged to be outraged

on behalf of all the winemakers in the countries 13 different wine-growing regions, from the smallest in Saxony to the largest in the Rheinhessen region. I have learned in the meantime where it all went wrong since in the 1970s, many of Germany’s best wine-growing regions were cultivated for mass productions with Blue Nun and the like particularly aimed at the British market. However, things have changed. From the 1980s onwards, a new generation of wine makers, who had studied wine making not only in Germany but also abroad and learning from the best, took over the family estates. Apart from Riesling, which has traditionally been a major grape variety (and is a top seller in the USA), they also started introducing international grapes such as Sauvignon Blanc or Chardonnay. The cultivation of red wines has risen too, and in a blind tasting of Pinot Noirs from ten different wine-growing nations a few years back, that was organised by the German Wine Institute in London, seven of the judges’ top ten Pinot Noirs came from – Germany. Maybe I don’t need to be outraged for much longer. The perception of German wines in the UK is changing, helped by the fact that well-known British wine

writers actually endorse German wines now. Needless to say, I’m also taking every opportunity to tell everyone what German wines are really about. So, next time you come across a German wine, give it a try, it might be better than you think. Just stay away from the Blue Nun, please …