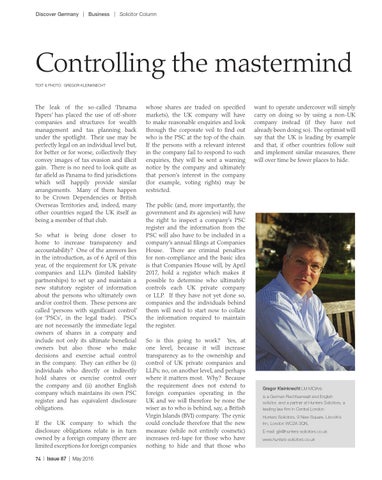 The leak of the so-called ‘Panama Papers’ has placed the use of off-shore companies and structures for wealth management and tax planning back under the spotlight. Their use may be perfectly legal on an individual level but, for better or for worse, collectively they convey images of tax evasion and illicit gain. There is no need to look quite as far afield as Panama to find jurisdictions which will happily provide similar arrangements. Many of them happen to be Crown Dependencies or British Overseas Territories and, indeed, many other countries regard the UK itself as being a member of that club. So what is being done closer to home to increase transparency and accountability? One of the answers lies in the introduction, as of 6 April of this year, of the requirement for UK private companies and LLPs (limited liability partnerships) to set up and maintain a new statutory register of information about the persons who ultimately own and/or control them. These persons are called ‘persons with significant control’ (or ‘PSCs’, in the legal trade). PSCs are not necessarily the immediate legal owners of shares in a company and include not only its ultimate beneficial owners but also those who make decisions and exercise actual control in the company. They can either be (i) individuals who directly or indirectly hold shares or exercise control over the company and (ii) another English company which maintains its own PSC register and has equivalent disclosure obligations. If the UK company to which the disclosure obligations relate is in turn owned by a foreign company (there are limited exceptions for foreign companies 74 | Issue 87 | May 2016

whose shares are traded on specified markets), the UK company will have to make reasonable enquiries and look through the corporate veil to find out who is the PSC at the top of the chain. If the persons with a relevant interest in the company fail to respond to such enquiries, they will be sent a warning notice by the company and ultimately that person’s interest in the company (for example, voting rights) may be restricted.

want to operate undercover will simply carry on doing so by using a non-UK company instead (if they have not already been doing so). The optimist will say that the UK is leading by example and that, if other countries follow suit and implement similar measures, there will over time be fewer places to hide.

The public (and, more importantly, the government and its agencies) will have the right to inspect a company’s PSC register and the information from the PSC will also have to be included in a company’s annual filings at Companies House. There are criminal penalties for non-compliance and the basic idea is that Companies House will, by April 2017, hold a register which makes it possible to determine who ultimately controls each UK private company or LLP. If they have not yet done so, companies and the individuals behind them will need to start now to collate the information required to maintain the register. So is this going to work? Yes, at one level, because it will increase transparency as to the ownership and control of UK private companies and LLPs; no, on another level, and perhaps where it matters most. Why? Because the requirement does not extend to foreign companies operating in the UK and we will therefore be none the wiser as to who is behind, say, a British Virgin Islands (BVI) company. The cynic could conclude therefore that the new measure (while not entirely cosmetic) increases red-tape for those who have nothing to hide and that those who