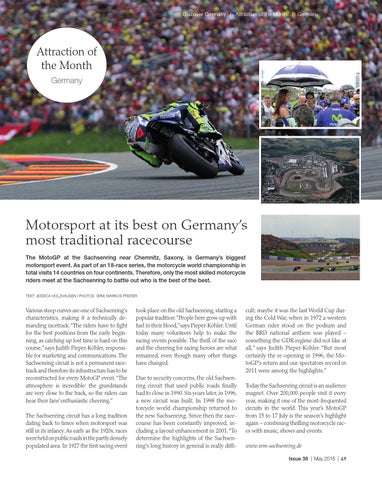 Motorsport at its best on Germany’s most traditional racecourse The MotoGP at the Sachsenring near Chemnitz, Saxony, is Germany’s biggest motorsport event. As part of an 18-race series, the motorcycle world championship in total visits 14 countries on four continents. Therefore, only the most skilled motorcycle riders meet at the Sachsenring to battle out who is the best of the best. TEXT: JESSICA HOLZHAUSEN I PHOTOS: SRM, MARKUS PFEIFER

Various steep curves are one of Sachsenring’s characteristics, making it a technically demanding racetrack. “The riders have to fight for the best positions from the early beginning, as catching up lost time is hard on this course,” says Judith Pieper-Köhler, responsible for marketing and communications. The Sachsenring circuit is not a permanent racetrack and therefore its infrastructure has to be reconstructed for every MotoGP event. “The atmosphere is incredible: the grandstands are very close to the track, so the riders can hear their fans’ enthusiastic cheering.” The Sachsenring circuit has a long tradition dating back to times when motorsport was still in its infancy. As early as the 1920s, races were held on public roads in the partly densely populated area. In 1927 the first racing event

took place on the old Sachsenring, starting a popular tradition:“People here grow up with fuel in their blood,”says Pieper-Köhler. Until today many volunteers help to make the racing events possible. The thrill of the race and the cheering for racing heroes are what remained, even though many other things have changed. Due to security concerns, the old Sachsenring circuit that used public roads finally had to close in 1990. Six years later, in 1996, a new circuit was built. In 1998 the motorcycle world championship returned to the new Sachsenring. Since then the racecourse has been constantly improved, including a layout enhancement in 2001.“To determine the highlights of the Sachsenring’s long history in general is really diffi-

cult: maybe it was the last World Cup during the Cold War, when in 1972 a western German rider stood on the podium and the BRD national anthem was played – something the GDR regime did not like at all,” says Judith Pieper-Köhler. “But most certainly the re-opening in 1996, the MotoGP’s return and our spectators record in 2011 were among the highlights.” Today the Sachsenring circuit is an audience magnet. Over 200,000 people visit it every year, making it one of the most-frequented circuits in the world. This year’s MotoGP from 15 to 17 July is the season’s highlight again – combining thrilling motorcycle races with music, shows and events. www.srm-sachsenring.de Issue 38 | May 2016 | 49