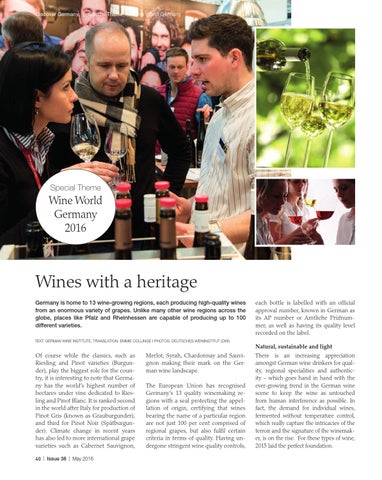 Wines with a heritage Germany is home to 13 wine-growing regions, each producing high-quality wines from an enormous variety of grapes. Unlike many other wine regions across the globe, places like Pfalz and Rheinhessen are capable of producing up to 100 different varieties.

each bottle is labelled with an official approval number, known in German as its AP number or Amtliche Prüfnummer, as well as having its quality level recorded on the label.

Natural, sustainable and light Of course while the classics, such as Riesling and Pinot varieties (Burgunder), play the biggest role for the country, it is interesting to note that Germany has the world’s highest number of hectares under vine dedicated to Riesling and Pinot Blanc. It is ranked second in the world after Italy for production of Pinot Gris (known as Grauburgunder), and third for Pinot Noir (Spätburgunder). Climate change in recent years has also led to more international grape varieties such as Cabernet Sauvignon, 40 | Issue 38 | May 2016

Merlot, Syrah, Chardonnay and Sauvignon making their mark on the German wine landscape. The European Union has recognised Germany’s 13 quality winemaking regions with a seal protecting the appellation of origin, certifying that wines bearing the name of a particular region are not just 100 per cent comprised of regional grapes, but also fulfil certain criteria in terms of quality. Having undergone stringent wine quality controls,

There is an increasing appreciation amongst German wine drinkers for quality, regional specialities and authenticity – which goes hand in hand with the ever-growing trend in the German wine scene to keep the wine as untouched from human interference as possible. In fact, the demand for individual wines, fermented without temperature control, which really capture the intricacies of the terroir and the signature of the winemaker, is on the rise. For these types of wine, 2015 laid the perfect foundation.