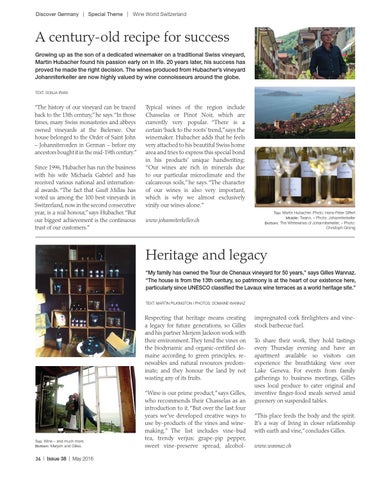 A century-old recipe for success Growing up as the son of a dedicated winemaker on a traditional Swiss vineyard, Martin Hubacher found his passion early on in life. 20 years later, his success has proved he made the right decision. The wines produced from Hubacher’s vineyard Johanniterkeller are now highly valued by wine connoisseurs around the globe. TEXT: SONJA IRANI

“The history of our vineyard can be traced back to the 13th century,” he says. “In those times, many Swiss monasteries and abbeys owned vineyards at the Bielersee. Our house belonged to the Order of Saint John – Johanniterorden in German – before my ancestors bought it in the mid-19th century.” Since 1996, Hubacher has run the business with his wife Michaela Gabriel and has received various national and international awards. “The fact that Gault Millau has voted us among the 100 best vineyards in Switzerland, now in the second consecutive year, is a real honour,” says Hubacher. “But our biggest achievement is the continuous trust of our customers.”

Typical wines of the region include Chasselas or Pinot Noir, which are currently very popular. “There is a certain ‘back to the roots’ trend,” says the winemaker. Hubacher adds that he feels very attached to his beautiful Swiss home area and tries to express this special bond in his products’ unique handwriting: “Our wines are rich in minerals due to our particular microclimate and the calcareous soils,” he says. “The character of our wines is also very important, which is why we almost exclusively vinify our wines alone.” www.johanniterkeller.ch

Heritage and legacy “My family has owned the Tour de Chenaux vineyard for 50 years,” says Gilles Wannaz. “The house is from the 13th century, so patrimony is at the heart of our existence here, particularly since UNESCO classified the Lavaux wine terraces as a world heritage site.” TEXT: MARTIN PILKINGTON I PHOTOS: DOMAINE WANNAZ

Respecting that heritage means creating a legacy for future generations, so Gilles and his partner Merjem Jackson work with their environment. They tend the vines on the biodynamic and organic-certified domaine according to green principles, renewables and natural resources predominate; and they honour the land by not wasting any of its fruits.

Top: Wine – and much more. Bottom: Merjem and Gilles.

“Wine is our prime product,” says Gilles, who recommends their Chasselas as an introduction to it. “But over the last four years we’ve developed creative ways to use by-products of the vines and winemaking.” The list includes vine-bud tea, trendy verjus; grape-pip pepper, sweet vine-preserve spread, alcohol-

impregnated cork firelighters and vinestock barbecue fuel. To share their work, they hold tastings every Thursday evening and have an apartment available so visitors can experience the breathtaking view over Lake Geneva. For events from family gatherings to business meetings, Gilles uses local produce to cater original and inventive finger-food meals served amid greenery on suspended tables. “This place feeds the body and the spirit. It’s a way of living in closer relationship with earth and vine,” concludes Gilles. www.wannaz.ch