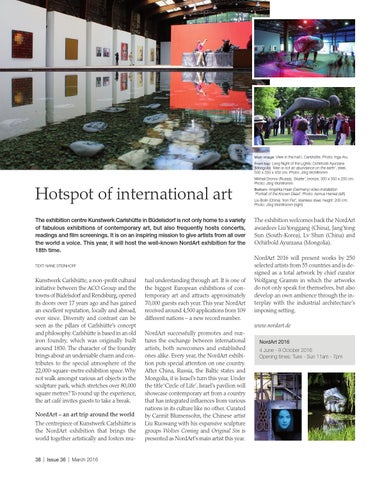 The exhibition centre Kunstwerk Carlshütte in Büdelsdorf is not only home to a variety of fabulous exhibitions of contemporary art, but also frequently hosts concerts, readings and film screenings. It is on an inspiring mission to give artists from all over the world a voice. This year, it will host the well-known NordArt exhibition for the 18th time.

Kunstwerk Carlshütte, a non-profit cultural initiative between the ACO Group and the towns of Büdelsdorf and Rendsburg, opened its doors over 17 years ago and has gained an excellent reputation, locally and abroad, ever since. Diversity and contrast can be seen as the pillars of Carlshütte’s concept and philosophy. Carlshütte is based in an old iron foundry, which was originally built around 1830. The character of the foundry brings about an undeniable charm and contributes to the special atmosphere of the 22,000-square-metre exhibition space. Why not walk amongst various art objects in the sculpture park, which stretches over 80,000 square metres? To round up the experience, the art café invites guests to take a break. NordArt – an art trip around the world The centrepiece of Kunstwerk Carlshütte is the NordArt exhibition that brings the world together artistically and fosters mu-

tual understanding through art. It is one of the biggest European exhibitions of contemporary art and attracts approximately 70,000 guests each year. This year NordArt received around 4,500 applications from 109 different nations – a new record number.

NordArt 2016 will present works by 250 selected artists from 55 countries and is designed as a total artwork by chief curator Wolfgang Gramm in which the artworks do not only speak for themselves, but also develop an own ambience through the interplay with the industrial architecture’s imposing setting. www.nordart.de

NordArt successfully promotes and nurtures the exchange between international artists, both newcomers and established ones alike. Every year, the NordArt exhibition puts special attention on one country. After China, Russia, the Baltic states and Mongolia, it is Israel’s turn this year. Under the title‘Circle of Life’, Israel’s pavilion will showcase contemporary art from a country that has integrated influences from various nations in its culture like no other. Curated by Carmit Blumensohn, the Chinese artist Liu Ruowang with his expansive sculpture groups Wolves Coming and Original Sin is presented as NordArt’s main artist this year.