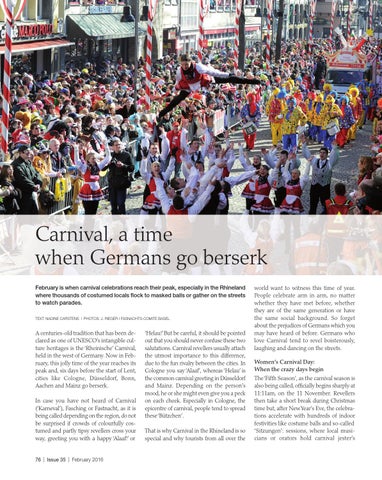 Carnival, a time when Germans go berserk February is when carnival celebrations reach their peak, especially in the Rhineland where thousands of costumed locals flock to masked balls or gather on the streets to watch parades. TEXT: NADINE CARSTENS | PHOTOS: J. RIEGER I FASNACHTS-COMITE BASEL

A centuries-old tradition that has been declared as one of UNESCO’s intangible culture heritages is the ‘Rheinische’ Carnival, held in the west of Germany. Now in February, this jolly time of the year reaches its peak and, six days before the start of Lent, cities like Cologne, Düsseldorf, Bonn, Aachen and Mainz go berserk. In case you have not heard of Carnival (‘Karneval’), Fasching or Fastnacht, as it is being called depending on the region, do not be surprised if crowds of colourfully costumed and partly tipsy revellers cross your way, greeting you with a happy ‘Alaaf!’ or

‘Helau!’But be careful, it should be pointed out that you should never confuse these two salutations. Carnival revellers usually attach the utmost importance to this difference, due to the fun rivalry between the cities. In Cologne you say ‘Alaaf’, whereas ‘Helau’ is the common carnival greeting in Düsseldorf and Mainz. Depending on the person’s mood, he or she might even give you a peck on each cheek. Especially in Cologne, the epicentre of carnival, people tend to spread these‘Bützchen’. That is why Carnival in the Rhineland is so special and why tourists from all over the

world want to witness this time of year. People celebrate arm in arm, no matter whether they have met before, whether they are of the same generation or have the same social background. So forget about the prejudices of Germans which you may have heard of before. Germans who love Carnival tend to revel boisterously, laughing and dancing on the streets. Women’s Carnival Day: When the crazy days begin The‘Fifth Season’, as the carnival season is also being called, officially begins sharply at 11:11am, on the 11 November. Revellers then take a short break during Christmas time but, after NewYear’s Eve, the celebrations accelerate with hundreds of indoor festivities like costume balls and so-called ‘Sitzungen’: sessions, where local musicians or orators hold carnival jester’s