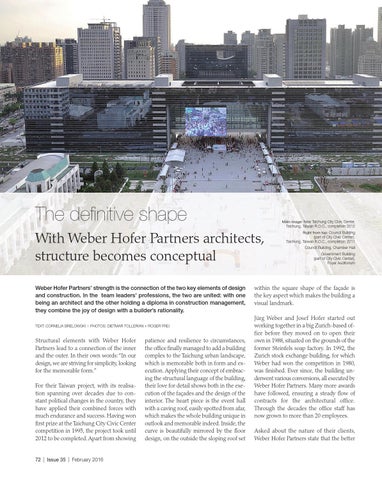 With Weber Hofer Partners architects, structure becomes conceptual Weber Hofer Partners’ strength is the connection of the two key elements of design and construction. In the team leaders’ professions, the two are united: with one being an architect and the other holding a diploma in construction management, they combine the joy of design with a builder’s rationality. TEXT: CORNELIA BRELOWSKI | PHOTOS: DIETMAR TOLLERIAN + ROGER FREI

Structural elements with Weber Hofer Partners lead to a connection of the inner and the outer. In their own words:“In our design, we are striving for simplicity, looking for the memorable form.” For their Taiwan project, with its realisation spanning over decades due to constant political changes in the country, they have applied their combined forces with much endurance and success. Having won first prize at the Taichung City Civic Center competition in 1995, the project took until 2012 to be completed. Apart from showing

patience and resilience to circumstances, the office finally managed to add a building complex to the Taichung urban landscape, which is memorable both in form and execution. Applying their concept of embracing the structural language of the building, their love for detail shows both in the execution of the façades and the design of the interior. The heart piece is the event hall with a caving roof, easily spotted from afar, which makes the whole building unique in outlook and memorable indeed. Inside, the curve is beautifully mirrored by the floor design, on the outside the sloping roof set

within the square shape of the façade is the key aspect which makes the building a visual landmark. Jürg Weber and Josef Hofer started out working together in a big Zurich-based office before they moved on to open their own in 1988, situated on the grounds of the former Steinfels soap factory. In 1992, the Zurich stock exchange building, for which Weber had won the competition in 1980, was finished. Ever since, the building underwent various conversions, all executed by Weber Hofer Partners. Many more awards have followed, ensuring a steady flow of contracts for the architectural office. Through the decades the office staff has now grown to more than 20 employees. Asked about the nature of their clients, Weber Hofer Partners state that the better