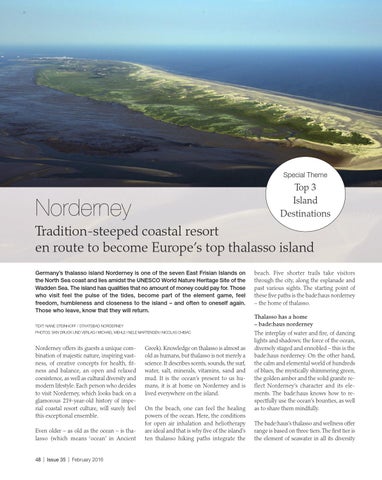 Tradition-steeped coastal resort en route to become Europe’s top thalasso island Germany’s thalasso island Norderney is one of the seven East Frisian Islands on the North Sea coast and lies amidst the UNESCO World Nature Heritage Site of the Wadden Sea. The island has qualities that no amount of money could pay for. Those who visit feel the pulse of the tides, become part of the element game, feel freedom, humbleness and closeness to the island – and often to oneself again. Those who leave, know that they will return.

Thalasso has a home – bade:haus norderney

Norderney offers its guests a unique combination of majestic nature, inspiring vastness, of creative concepts for health, fitness and balance, an open and relaxed coexistence, as well as cultural diversity and modern lifestyle. Each person who decides to visit Norderney, which looks back on a glamorous 219-year-old history of imperial coastal resort culture, will surely feel this exceptional ensemble. Even older – as old as the ocean – is thalasso (which means ‘ocean’ in Ancient

beach. Five shorter trails take visitors through the city, along the esplanade and past various sights. The starting point of these five paths is the bade:haus norderney – the home of thalasso.

Greek). Knowledge on thalasso is almost as old as humans, but thalasso is not merely a science. It describes scents, sounds, the surf, water, salt, minerals, vitamins, sand and mud. It is the ocean’s present to us humans, it is at home on Norderney and is lived everywhere on the island. On the beach, one can feel the healing powers of the ocean. Here, the conditions for open air inhalation and heliotherapy are ideal and that is why five of the island’s ten thalasso hiking paths integrate the

The interplay of water and fire, of dancing lights and shadows; the force of the ocean, diversely staged and ennobled – this is the bade:haus norderney. On the other hand, the calm and elemental world of hundreds of blues, the mystically shimmering green, the golden amber and the solid granite reflect Norderney’s character and its elements. The bade:haus knows how to respectfully use the ocean’s bounties, as well as to share them mindfully. The bade:haus’s thalasso and wellness offer range is based on three tiers. The first tier is the element of seawater in all its diversity