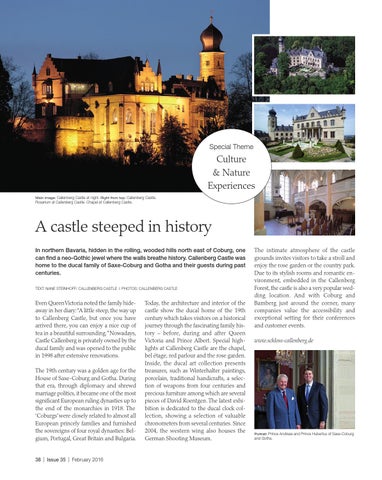 A castle steeped in history In northern Bavaria, hidden in the rolling, wooded hills north east of Coburg, one can find a neo-Gothic jewel where the walls breathe history. Callenberg Castle was home to the ducal family of Saxe-Coburg and Gotha and their guests during past centuries. TEXT: NANE STEINHOFF/ CALLENBERG CASTLE I PHOTOS: CALLENBERG CASTLE

Even QueenVictoria noted the family hideaway in her diary:“A little steep, the way up to Callenberg Castle, but once you have arrived there, you can enjoy a nice cup of tea in a beautiful surrounding.”Nowadays, Castle Callenberg is privately owned by the ducal family and was opened to the public in 1998 after extensive renovations. The 19th century was a golden age for the House of Saxe-Coburg and Gotha. During that era, through diplomacy and shrewd marriage politics, it became one of the most significant European ruling dynasties up to the end of the monarchies in 1918. The ‘Coburgs’were closely related to almost all European princely families and furnished the sovereigns of four royal dynasties: Belgium, Portugal, Great Britain and Bulgaria.

Today, the architecture and interior of the castle show the ducal home of the 19th century which takes visitors on a historical journey through the fascinating family history – before, during and after Queen Victoria and Prince Albert. Special highlights at Callenberg Castle are the chapel, bel étage, red parlour and the rose garden. Inside, the ducal art collection presents treasures, such as Winterhalter paintings, porcelain, traditional handicrafts, a selection of weapons from four centuries and precious furniture among which are several pieces of David Roentgen. The latest exhibition is dedicated to the ducal clock collection, showing a selection of valuable chronometers from several centuries. Since 2004, the western wing also houses the German Shooting Museum.

The intimate atmosphere of the castle grounds invites visitors to take a stroll and enjoy the rose garden or the country park. Due to its stylish rooms and romantic environment, embedded in the Callenberg Forest, the castle is also a very popular wedding location. And with Coburg and Bamberg just around the corner, many companies value the accessibility and exceptional setting for their conferences and customer events. www.schloss-callenberg.de

Portrait: Prince Andreas and Prince Hubertus of Saxe-Coburg and Gotha.