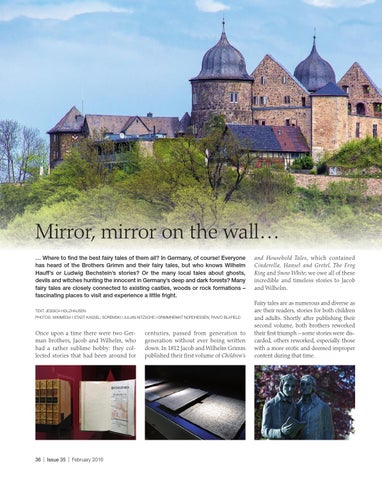 Mirror, mirror on the wall… … Where to find the best fairy tales of them all? In Germany, of course! Everyone has heard of the Brothers Grimm and their fairy tales, but who knows Wilhelm Hauff’s or Ludwig Bechstein’s stories? Or the many local tales about ghosts, devils and witches hunting the innocent in Germany’s deep and dark forests? Many fairy tales are closely connected to existing castles, woods or rock formations – fascinating places to visit and experience a little fright. TEXT: JESSICA HOLZHAUSEN PHOTOS: WIKIMEDIA I STADT KASSEL; SOREMSKI I JULIAN NITZSCHE I GRIMMHEIMAT NORDHESSEN; PAAVO BLAFIELD

Once upon a time there were two German brothers, Jacob and Wilhelm, who had a rather sublime hobby: they collected stories that had been around for

centuries, passed from generation to generation without ever being written down. In 1812 Jacob and Wilhelm Grimm published their first volume of Children’s