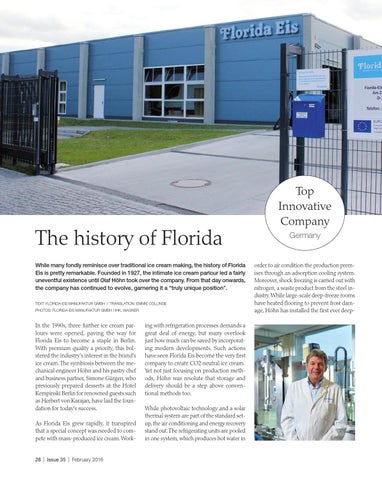 The history of Florida While many fondly reminisce over traditional ice cream making, the history of Florida Eis is pretty remarkable. Founded in 1927, the intimate ice cream parlour led a fairly uneventful existence until Olaf Höhn took over the company. From that day onwards, the company has continued to evolve, garnering it a “truly unique position”. TEXT: FLORIDA-EIS MANUFAKTUR GMBH I TRANSLATION: EMMIE COLLINGE PHOTOS: FLORIDA-EIS MANUFAKTUR GMBH I IHK, WAGNER

In the 1990s, three further ice cream parlours were opened, paving the way for Florida Eis to become a staple in Berlin. With premium quality a priority, this bolstered the industry’s interest in the brand’s ice cream. The symbiosis between the mechanical engineer Höhn and his pastry chef and business partner, Simone Gürgen, who previously prepared desserts at the Hotel Kempinski Berlin for renowned guests such as Herbert von Karajan, have laid the foundation for today’s success. As Florida Eis grew rapidly, it transpired that a special concept was needed to compete with mass-produced ice cream. Work-

ing with refrigeration processes demands a great deal of energy, but many overlook just how much can be saved by incorporating modern developments. Such actions have seen Florida Eis become the very first company to create CO2 neutral ice cream. Yet not just focusing on production methods, Höhn was resolute that storage and delivery should be a step above conventional methods too. While photovoltaic technology and a solar thermal system are part of the standard setup, the air conditioning and energy recovery stand out.The refrigerating units are pooled in one system, which produces hot water in

order to air condition the production premises through an adsorption cooling system. Moreover, shock freezing is carried out with nitrogen, a waste product from the steel industry. While large-scale deep-freeze rooms have heated flooring to prevent frost damage, Höhn has installed the first ever deep-