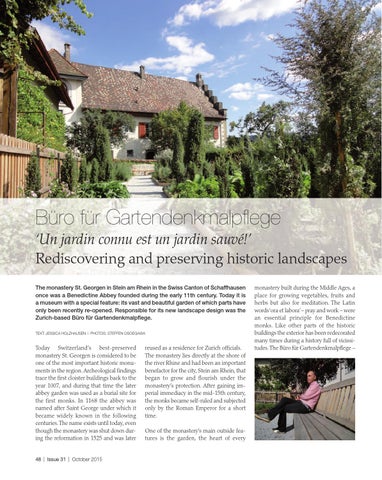 Büro für Gartendenkmalpflege ‘Un jardin connu est un jardin sauvé!’ Rediscovering and preserving historic landscapes The monastery St. Georgen in Stein am Rhein in the Swiss Canton of Schaffhausen once was a Benedictine Abbey founded during the early 11th century. Today it is a museum with a special feature: its vast and beautiful garden of which parts have only been recently re-opened. Responsible for its new landscape design was the Zurich-based Büro für Gartendenkmalpflege. TEXT: JESSICA HOLZHAUSEN | PHOTOS: STEFFEN OSOEGAWA

Today Switzerland’s best-preserved monastery St. Georgen is considered to be one of the most important historic monuments in the region. Archeological findings trace the first cloister buildings back to the year 1007, and during that time the later abbey garden was used as a burial site for the first monks. In 1168 the abbey was named after Saint George under which it became widely known in the following centuries.The name exists until today, even though the monastery was shut down during the reformation in 1525 and was later

reused as a residence for Zurich officials. The monastery lies directly at the shore of the river Rhine and had been an important benefactor for the city, Stein am Rhein, that began to grow and flourish under the monastery’s protection. After gaining imperial immediacy in the mid-15th century, the monks became self-ruled and subjected only by the Roman Emperor for a short time. One of the monastery’s main outside features is the garden, the heart of every

monastery built during the Middle Ages, a place for growing vegetables, fruits and herbs but also for meditation. The Latin words‘ora et labora’– pray and work – were an essential principle for Benedictine monks. Like other parts of the historic buildings the exterior has been redecorated many times during a history full of vicissitudes. The Büro für Gartendenkmalpflege –