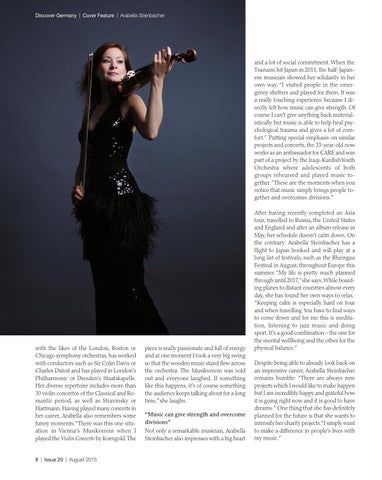 and a lot of social commitment. When the Tsunami hit Japan in 2011, the half-Japanese musician showed her solidarity in her own way. “I visited people in the emergency shelters and played for them. It was a really touching experience because I directly felt how music can give strength. Of course I can’t give anything back materialistically but music is able to help heal psychological trauma and gives a lot of comfort.” Putting special emphasis on similar projects and concerts, the 33-year-old now works as an ambassador for CARE and was part of a project by the Iraqi-KurdishYouth Orchestra where adolescents of both groups rehearsed and played music together.“These are the moments when you notice that music simply brings people together and overcomes divisions.”

with the likes of the London, Boston or Chicago symphony orchestras, has worked with conductors such as Sir Colin Davis or Charles Dutoit and has played in London’s Philharmonic or Dresden’s Staatskapelle. Her diverse repertoire includes more than 30 violin concertos of the Classical and Romantic period, as well as Stravinsky or Hartmann. Having played many concerts in her career, Arabella also remembers some funny moments:“There was this one situation in Vienna’s Musikverein when I played the Violin Concerto by Korngold.The

piece is really passionate and full of energy and at one moment I took a very big swing so that the wooden music stand flew across the orchestra. The Musikverein was sold out and everyone laughed. If something like this happens, it’s of course something the audience keeps talking about for a long time,”she laughs. “Music can give strength and overcome divisions” Not only a remarkable musician, Arabella Steinbacher also impresses with a big heart

After having recently completed an Asia tour, travelled to Russia, the United States and England and after an album release in May, her schedule doesn’t calm down. On the contrary: Arabella Steinbacher has a flight to Japan booked and will play at a long list of festivals, such as the Rheingau Festival in August, throughout Europe this summer. “My life is pretty much planned through until 2017,”she says. While boarding planes to distant countries almost every day, she has found her own ways to relax. “Keeping calm is especially hard on tour and when travelling.You have to find ways to come down and for me this is meditation, listening to jazz music and doing sport. It’s a good combination – the one for the mental wellbeing and the other for the physical balance.” Despite being able to already look back on an impressive career, Arabella Steinbacher remains humble: &quot;There are always new projects which I would like to make happen but I am incredibly happy and grateful how it is going right now and it is good to have dreams.&quot; One thing that she has definitely planned for the future is that she wants to intensify her charity projects.“I simply want to make a difference in people’s lives with my music.”