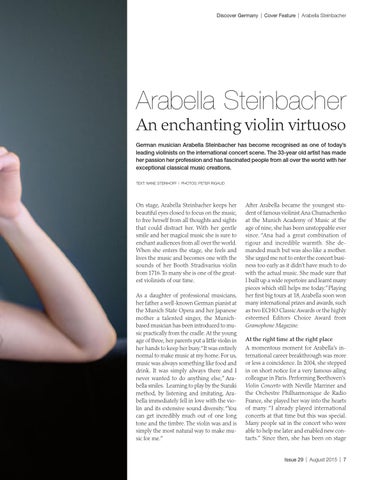 Arabella Steinbacher An enchanting violin virtuoso German musician Arabella Steinbacher has become recognised as one of today’s leading violinists on the international concert scene. The 33-year old artist has made her passion her profession and has fascinated people from all over the world with her exceptional classical music creations. TEXT: NANE STEINHOFF | PHOTOS: PETER RIGAUD

On stage, Arabella Steinbacher keeps her beautiful eyes closed to focus on the music, to free herself from all thoughts and sights that could distract her. With her gentle smile and her magical music she is sure to enchant audiences from all over the world. When she enters the stage, she feels and lives the music and becomes one with the sounds of her Booth Stradivarius violin from 1716.To many she is one of the greatest violinists of our time. As a daughter of professional musicians, her father a well-known German pianist at the Munich State Opera and her Japanese mother a talented singer, the Munichbased musician has been introduced to music practically from the cradle. At the young age of three, her parents put a little violin in her hands to keep her busy.“It was entirely normal to make music at my home. For us, music was always something like food and drink. It was simply always there and I never wanted to do anything else,” Arabella smiles. Learning to play by the Suzuki method, by listening and imitating, Arabella immediately fell in love with the violin and its extensive sound diversity. “You can get incredibly much out of one long tone and the timbre. The violin was and is simply the most natural way to make music for me.”

After Arabella became the youngest student of famous violinist Ana Chumachenko at the Munich Academy of Music at the age of nine, she has been unstoppable ever since. “Ana had a great combination of rigour and incredible warmth. She demanded much but was also like a mother. She urged me not to enter the concert business too early as it didn’t have much to do with the actual music. She made sure that I built up a wide repertoire and learnt many pieces which still helps me today.”Playing her first big tours at 18, Arabella soon won many international prizes and awards, such as two ECHO Classic Awards or the highly esteemed Editors Choice Award from Gramophone Magazine. At the right time at the right place A momentous moment for Arabella’s international career breakthrough was more or less a coincidence. In 2004, she stepped in on short notice for a very famous ailing colleague in Paris. Performing Beethoven’s Violin Concerto with Neville Marriner and the Orchestre Philharmonique de Radio France, she played her way into the hearts of many. “I already played international concerts at that time but this was special. Many people sat in the concert who were able to help me later and enabled new contacts.” Since then, she has been on stage