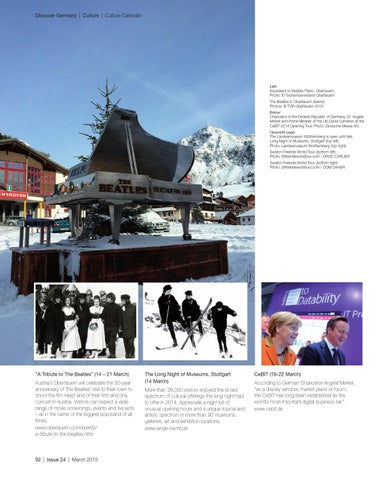 “A Tribute to The Beatles” (14 – 21 March) Austria’s Obertauern will celebrate the 50-year anniversary of The Beatles’ visit to their town to shoot the film Help! and of their first and only concert in Austria. Visitors can expect a wide range of movie screenings, events and live acts – all in the name of the biggest pop-band of all times. www.obertauern.com/events/ a-tribute-to-the-beatles.html

The Long Night of Museums, Stuttgart (14 March) More than 26,000 visitors enjoyed the broad spectrum of cultural offerings the long night had to offer in 2014. Appreciate a night full of unusual opening hours and a unique topical and artistic spectrum in more than 90 museums, galleries, art and exhibition locations. www.lange-nacht.de

CeBIT (16-22 March) According to German Chancellor Angela Merkel, “as a display window, market place or forum, the CeBIT has long been established as the world’s most important digital business fair.” www.cebit.de